As for ‘livability,’ it doesn’t count 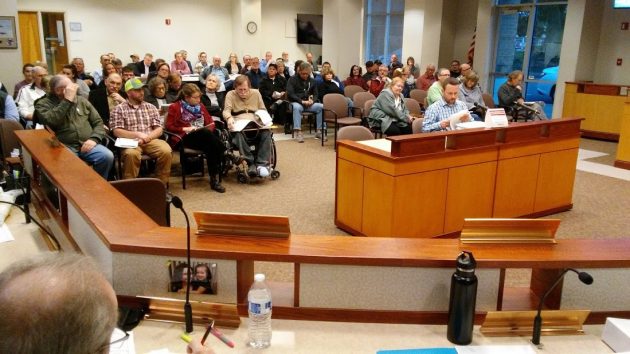 The audience listens to the Pheasant Run proposal at the Albany Planning Commission meeting on Monday, March 5.

New Albany subdivisions have to meet six criteria in order to be approved. But there is no mention of preventing crowding, or congestion at rush hour, or saving wildlife, or anything else that comes under the admittedly vague concept of preserving livability.

This was apparent once again when the city’s planning commission held a hearing Monday on the preliminary plat for the endearingly but deceptively named Pheasant Run, a big subdivision that would cover much of a so-far undeveloped tract of farmland in the middle of North Albany, north of Dover Avenue and west of Crocker Lane.

By the time of the hearing the developer, Hayden Homes, had revised the original plan from 148 lots for single-family houses to 147. Instead of cutting down all the old white oaks on the property (a Google aerial view shows eight), the revised plan would save two big ones. Houses and streets would cover about 35 acres of the 47.5-acre tract. Twelve acres would be left open and natural.

More than dozen neighbors living in the subdivisions surrounding Pheasant Run testified. Most of them complained that North Albany had already become too crowded and the addition of 147 houses would make traffic even worse in the mornings and afternoons, not to mention other concerns including the impact on schools, or the loss of venerable trees.

North Albany is expected to have a population of 8,000 by 2020, up from 5,100 in 2000. The problem with traffic is that much of the district’s morning commuter traffic funnels through just two main roads — North Albany and Spring Hill — and then across one two-lane bridge approaching the 100th anniversary of its design. But none of that means anything to the criteria for subdivisions in the Albany development code.

The criteria say subdivisions must meet the existing zoning, must allow development of nearby property according to the zoning, must have a street plan that works “under the circumstances,” must allow service by various utilities, and must comply with requirements if they are in special zoning districts such as “airport approach,” “natural resources,” or “historic.”

Pheasant Run obviously meets the criteria, and it will be approved, just like other big housing tracts in North Albany have been approved without regard to their cumulative impact since the formerly rural area was annexed by Albany in June 1991.

Not so fast, though. The planning commission continued the hearing until Monday, March 19, and the process is still open for testimony from both sides.

While 147 lots are now proposed, the zoning would allow up to 190. So the impact on roads and everything else could have been worse. People can console themselves with that thought when they sit in traffic a few years from now. (hh)

The field that will become Pheasant Run, looking east from Essex Street.