As expected, a new subdivision off Ellingson 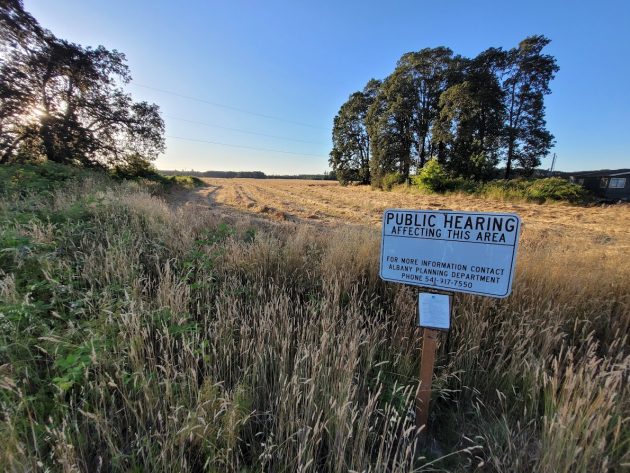 Here’s what the area of the proposed subdivision looked like in July. Those trees in the background are doomed.

This July the Albany City Council annexed 20 acres of farmland and a mobile home at Lochner and Ellingson Roads. Now, as expected, a nationwide homebuilding company has filed a tentative subdivision plat for 101 houses on the land.

The filing calls for felling 36 trees.

The Albany planning division has just posted a public notice of the filing. The city says it has notified owners within 1,000 feet and given them until Oct. 10 to submit comments.

It is up to the planning staff to act on the application, and there’s no question that the staff will approve it. The plat conforms to the zoning and, as far as I can see, complies with other requirements of the city’s development code.

Converting this open farmland to suburban housing was foreshadowed nearly 50 years ago when the city included the land in its urban gowth boundary. Then, the conversion was assumed when the city adopted its South Albany Area Plan about 10 years ago. And it was assured when the annexation was approved this summer.

For years there has been talk of designing cities differently. But subdivisions being built in Albany now follow the old mid-century style: lots of single-family houses bunched together on more or less identical-size lots  along tree-lined streets, with no room for a neighborhood store or any other service people might be able to reach on foot.

Lennar is also building the 128-lot Henshaw Farms subdivision just to the east, at Ellingson Road and Columbus Street.

The new development at Ellingson and Lochner is named Curry Meadows, after the current land owner.  But as for actual meadows, you won’t see many of those when the houses all are built. (hh)

Here’s a drawing of the proposed Curry Meadows Subdivision north of Ellingson Road.


15 responses to “As expected, a new subdivision off Ellingson”