Art project off Lyon gets enhancements 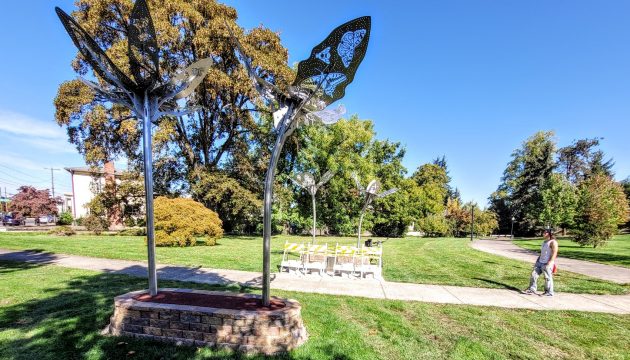 A passerby strolls past the art pr0ject on Lyon Street near Eighth on Saturday.

On this rainy Tuesday, let’s go back to last Saturday, when it was still sunny and warm and the new brick work around Albany’s public art project caught my eye as I passed by on the bike.

Each of the two pairs of metal wildflower sculptures now is surrounded at its base by a brick enclosure filled with what looks like ground-up lava rock.  The structures resemble the shape of livestock watering troughs. I imagine that bath tubs in ancient Rome might have looked kind of like that.

Here’s a view from the other side, with traffic on Lyon Street in the background: 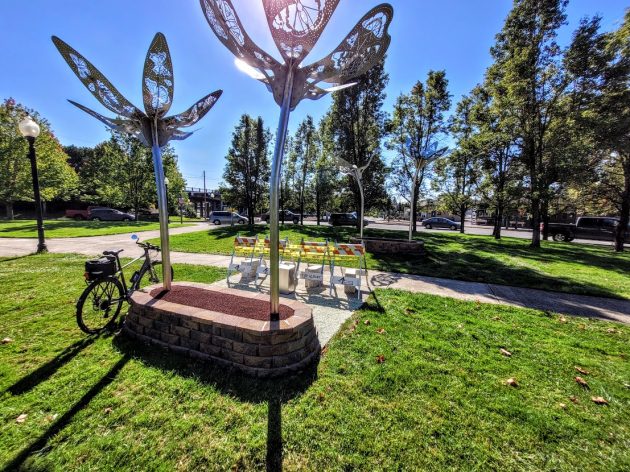 Some heavy granite blocks were sitting there, below the caution tape, ready to support benches that were yet to be installed.

The parks department’s Francisco Ruiz Santiago built the brick structures and is creating the benches as well. “It is looking so nice and I can’t wait to see it when it is all completed,” said Kim Lyddane, Albany parks and recreation director.

Also set to be added to the site before long: a small sign telling people about the sculptures. The Albany Arts Commission has put together a design for the sign.

The project is an outgrowth of the construction in 2017 of the city’s new main fire station and police headquarters. A city ordinance says 1 percent of the cost of some new public buildings must he spent on art, and in 2018 the city council allocated 80,000 to an art project that became this one.

After a design competition, the arts commission picked the artist and the location for the sculptures, near the southern entrance to downtown off Highway 99E.

The sculptures were created by South Carolina artist Deedee Morrison and installed just before Christmas in 2020.

Will there ever be a public dedication of this work? Lyddane says the arts commission may discuss that when it meets again. (hh)


7 responses to “Art project off Lyon gets enhancements”