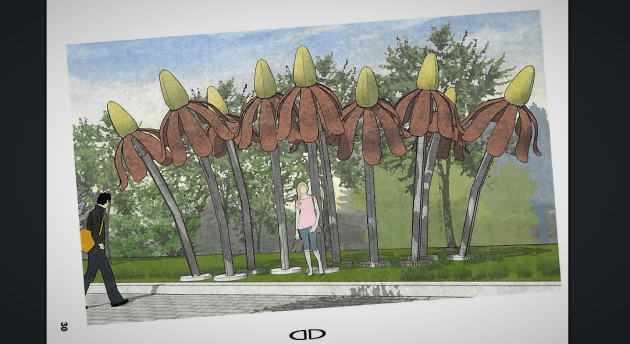 Here is artist Deedee Morrison’s concept of the art she proposed for a downtown Albany site off Lyon Street.

On a winter night, imagine going down the Pacific Boulevard off-ramp to downtown Albany and, on your right, seeing the petals of giant wildflowers glowing in the dark.  Pretty cool, right?

This pleasing prospect is a possibility now that the Albany Arts Commission has chosen an artist to fulfill the city’s mandate under the city’s 1-percent-for-art ordinance. The ordinance comes into play in connection with the completion of new buildings for the police and fire departments.

The city council authorized $80,000 for the art project in January. Since then, the arts commission invited proposals, evaluated those from five finalists, and on Nov. 13 agreed that Deedee Morrison, of Greenville, S.C., should create a sculpture for Albany. Previously, the arts panel had picked a grassy spot near the Pacific off-ramp and Lyon Street as the site for this work.

The council will get a report on all this when it meets for a work session on Monday afternoon (4 p.m. Dec. 3 at City Hall).

Julie Jackson, chair of the arts commission, told me the sculpture can’t cost more than the city’s $80,000 budget. And while Morrison was picked based partly on drawings of what she proposes, the artist plans to come to Albany for a series of meetings to talk about the final design.

Her drawings show a group of 10 steel structures, 10 to 12 feet tall and constructed to resemble wildflowers. The petals have LED lights embedded in them, and the glass globe atop each one “lights up with vibrant color at night.” The lights are programmed to change during the night so that “every visit is new.”

“When visitors are near the sculpture, integrated sensors pick up the motion and trigger more animation and interactive sequencing of the lighting effects,” the artist says, explaining her concept.

The site picked by the arts commission is controlled by ODOT, so Albany will have to request permission to put the shimmering wildlflowers there.

Anyone remember the neon horses an Oregon artist placed in the median of I-5 between Albany and Eugene? For a few months that foggy winter some 20 or 30 years ago, the glow of those creations turned every nighttime drive down the freeway into an aesthetic experience. Now Albany has a chance to do something similar, not just routine public art but a touch of whimsy and joy. (hh) 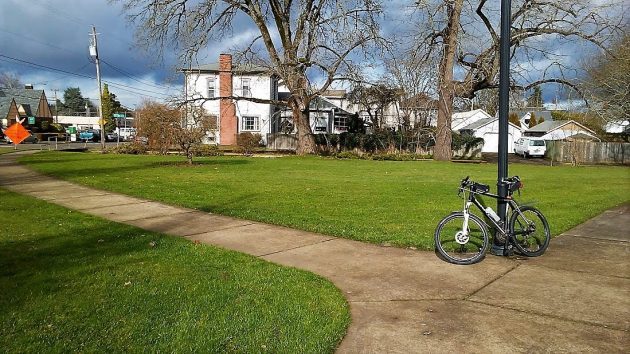 I took this shot in January to show roughly where the sculpture would go.

34 responses to “Art for Albany: City panel picks a concept”