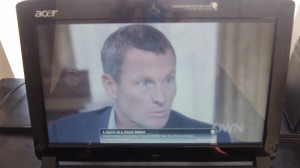 His many critics — is there anyone NOT a critic of him? — were not impressed with Lance Armstrong’s admission that he boosted his performance with banned substances in order to win the Tour de France seven times. He did not appear to them to be contrite enough. He did not weep. He did not implicate others. He did not ask for forgiveness. Instead, he answered quesions with a certain amount of detachment, even while admitting that he acted like a jerk in attacking, over many years, people who charged publicly that he was cheating.

Armstrong said among other things that he considered blood doping and other measures to be part of his job. That’s plausible, considering what was going on in professional cycling in Europe during the period when he raced there. Many other champions and near-champions, as well as plenty of also-rans, were later suspended for having used banned substances. Getting an edge and trying not to get caught were clearly part of this grueling sport, and as ex-Armstrong teammate Tyler Hamilton wrote in his book “The Secret Race,” even a supremely talented athlete like him could not compete without joining the practice.

Everybody who made money from Armstrong’s career, including companies whose products he was paid to endorse, now is turning against Armstrong. If these people are so noble and so hurt, let them pay back the money THEY made.

As for lying for as long as Armstrong did, what else was he going to do? Once you start lying on a high level visible to the entire world, it’s only natural to keep it up as long as you can. You stop when it becomes ridiculous, when the truth has come out and continuing to lie makes you look idiotic. That’s what Armstrong has done. (On the other hand, Bill Clinton lied without ever coming clean, and look at his exalted status now!)

The world may expect Lance Armstrong to get on his knees, blubber for forgiveness and rat out lots of others. We should be thankful that so far, that’s one thing he has not done. (hh)

From Ernest Murphy (via Facebook): In the beginning Lance rode a bike. Then he became a Hematologist? Or he hired one? Lance is admitting he was competitive and he found and edge few knew of. Would he not be a good judge of others attempting to cheat? There is a place for him in society. I have no ill will for him. He didn’t kill anyone and he could have killed himself.