Area cleaned up by — guess who? 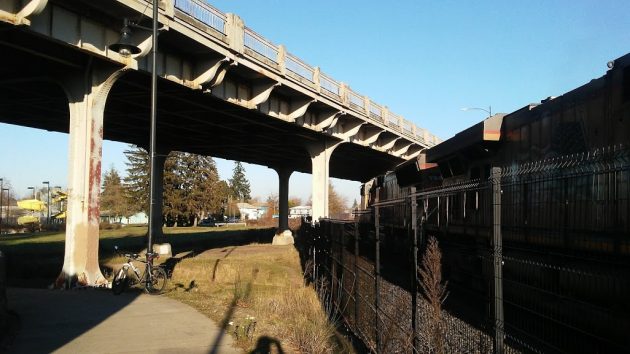 A freight train passes under the Pacific viaduct Wednesday. The area under the bridge has been cleaned up.

The Swanson Path and surrounding grounds, which only a week ago had been a mess of discarded blankets and other trash, has been cleaned up, and you’ll be astonished to learn by whom.

The path runs under the Pacific Boulevard viaduct and connects Albany Station with the neighborhood around Swanson Park. I went through there on the bike and complained about the conditions in a story on Jan. 22.  On another jaunt on Wednesday, the area under the viaduct looked much, much better. The rags were gone, and so was the waste paper and almost all the other trash.

Who cleaned it up, I wondered. I inquired at City Hall, and public information officer Marilyn Smith came back with the story in brief:

“The property under the overpass was cleaned up by people who were hanging out there, encouraged by APD Lt. Steve Dorn, who has recently been assigned to supervise the Community Resource Unit. He stopped by on his way to work on Tuesday and spoke to the people who were there. One was arrested on warrants; the others have moved on.”

Encouraged, eh? Whatever he said or did, it seems to have worked. This wasn’t the first time that the ODOT property under the overpass has had to be cleaned up, and chances are it won’t be the last. But if Lt. Dorn’s encouragement did the trick, it’s something to keep in mind for the next time.

I also noticed that some big graffiti on the concrete blocks of the path’s retaining wall had been painted over, not once but twice. For that chore, we owe a debt of gratitude to the maintenance staff of Albany Parks. (hh)

The story has been edited to correct the park’s name. After calling the park by its right name for more than 40 years, how can I suddenly come up with the wrong one? 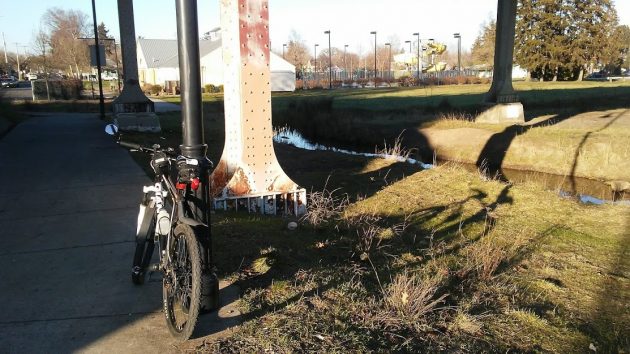 The discarded blankets and other debris were gone on Wednesday afternoon.