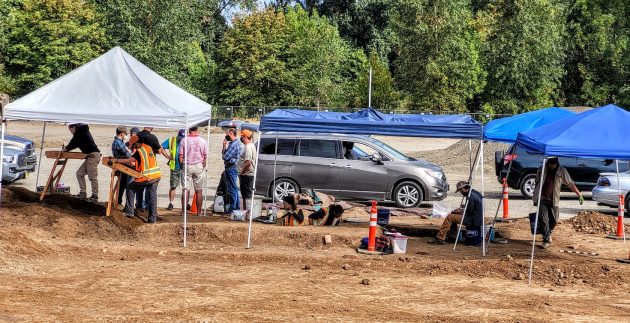 The archaeological dig at the site of The Banks apartment project as it looked on Monday morning.

An archaeological team continued working Monday at the construction site of “The Banks” apartment project near Bowman Park on the Willamette River. Exactly what they are finding, if anything, remains a matter of speculation.

The dig is being conducted by Willamette Cultural Resources Associates, a company with offices in Seattle and Portland that has done all kinds of historical and archaeological research projects in the Pacific Northwest.

The excavation at the apartment site between Linn Avenue and the Willamette River has been going on for several weeks, according to neighbors. I got some long-distance photos of the scene on Monday morning, but I wasn’t able to reach anybody there for an explanation of what it is they’re excavating.

As I understand it from sketchy reports from various sources, site work for the apartment complex uncovered some “remains” at the site. This prompted a call to police, who evidently concluded the find was nothing modern that concerned them.

The Oregon State Historic Preservation Office issued a permit for an archaeological examination of the site. Jamie French, the assistant state archaeologist, told me Monday the office won’t know the results of the examination until a report is filed, and so far none has been received.

Archaeological projects apparently are governed by state laws demanding secrecy, which makes getting the details a challenge. Emailed inquiries sent to the apartment developer and Willamette Cultural Resources did not yield a response by Monday afternoon.

The dig is obviously holding up construction work in the immediate vicinity of where it is taking place. But French, the SHPO official, told me state regulations allow construction to continue outside a 100-yard buffer around such excavations.

The apartment complex being constructed there will have nine buildings and 120 units on a site of 6.2 acres on the east side of Geary Street, across Geary from Bowman Park. (hh)

Postscript: Albany police say they didn’t respond to the scene. Maybe my informant was mistaken about what he heard on his scanner. 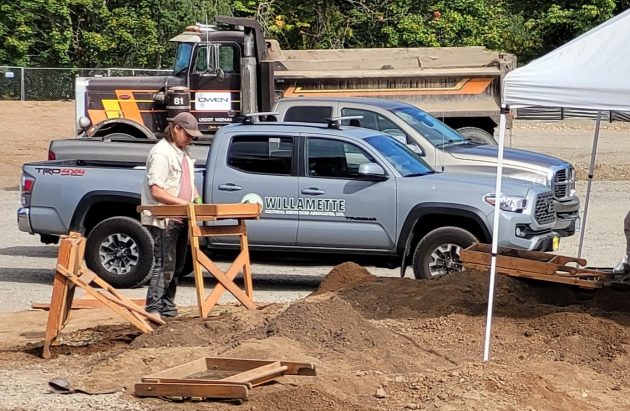 A worker sifts material excavated from the site on Monday morning.