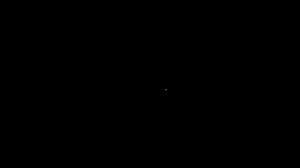 See an asteroid there? Me neither. The tiny dot is a planet.

NASA now says the chance that the asteroid named Apophis will slam into the Earth in 2036 is so small as to be not worth worrying about. So we are supposed to feel reassured. Actually, some of us were never all that worried. There’s a pretty good chance we won’t be around in another 23 years to find out what happens with that asteroid. But of course we should be worried about the younger generations. And we are. The asteroid measures about 350 yards across. That’s a pretty hefty chunk of rock, and if it slammed into us at asteroid speed, which I guess is thousand miles a minute or something like that, we would probably know it. Or not. More likely it would be over before we knew what hit us. This giant rock apparently passes by the Earth every few years. And after it was discovered, in 2004, it was thought it might come pretty close to Earth in 2029. Further observation proved that fear was groundless, but a chance remained for a collision in 2036. On Jan. 10, though, NASA scientists at the Jet Propulsion Laboratory in Pasadena announced that they had now ruled this out. Ruled it out? Well, not quite. They said they had “effectively ruled it out” because they had determined the chance of a collision was less than one in a million. A chance of less than one in a million is still a real chance, as a lot of Powerball and Megabucks players keep thinking as they plunk down their money in the hope of getting rich overnight. Still, as far as that goes, it now appears life on Earth will in all likelihood go on past 2036, which among other things means that Congress really should try to figure out how to keep Social Security solvent well past that year. (hh)