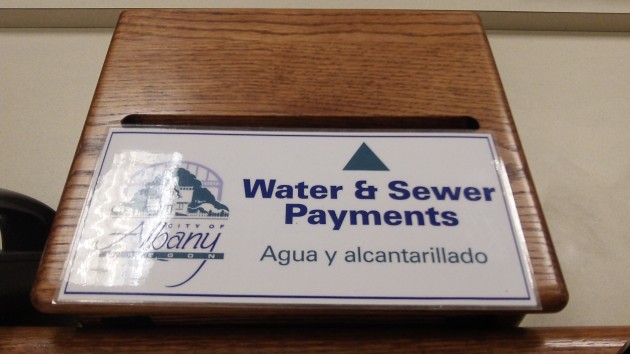 Albany’s plan goes way beyond bilingual signs like this one at City Hall.

If someone needs help in Albany but can’t speak English, you would try to find someone who can interpret, right? That’s common courtesy. It’s also the law when it comes to public services. But as with almost everything, simplicity goes out the window when the federal government gets involved.

The Albany city administration believes that because it receives federal funds, it is required to make a plan to deal with people whose English is shaky or absent. It has made and is seeking public comment on what it calls the LEP plan. (Another approach would be to say: “Look, if you want something, bring a friend or somebody who can let us know in English.” But chances are that would fall short of what the proverbial “regulations” require, and we must do whatever the regulators want, mustn’t we?)

LEP stands for “limited English proficiency,” and that the plan is aptly named is demonstrated by a sentence like this one: “The City of Albany follows four factors that apply to the various kinds of contacts that the public has to access language needs and decides what reasonable steps it should take to ensure meaningful access for LEP persons.” Huh? How does one follow a factor?

The gist of the plan is simple enough. If city employees — a cop, say, or someone behind the counter at the parks department — run into someone who has no English, the employees will try to determine what language the customer does know. Unless it is obvious, they’ll whip out a language identification card that asks the customer in 38 different languages, from Arabic to Yiddish, to put a check mark next to the one he reads or speaks. Once the language is determined, the city will make an attempt, within reason, to find someone who can interpret or translate.

All this is spelled out in bureaucratic detail and tortured prose in the city’s 15-page plan (18 pages if you count the sample of the language identification card). But whether all the details can really be carried out is hard to say. For instance, it says that if someone gives the city seven days notice, the city will provide an interpreter at a public meeting. At no cost, by the way.

It might be fun to see council members say something and then wait for their comments to be rendered in translation so a visitor can follow along in Urdu, say, or Tagalog. Come to think of it, at some city meetings a short translation into English would help. (hh)

5 responses to “Anybody here speak English?”