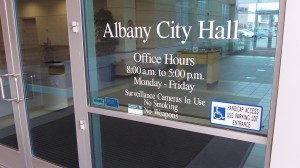 This is how the Albany City Council plans to deal with voter approval of the debt limit initiative last month: At a work session on Monday afternoon it will preview the draft of an ordinance which the council could then enact on Wednesday. The outlines of the draft were agreed on — though not formally — at an executive session earlier.

The draft accepts the election result but says the debt measure cannot be placed in the charter because it did not get an absolute majority of all city voters. It further declares the council’s intention to abide by the terms of the measure while it starts work, with a citizens committee, to draft a new charter amendment to be voted on in November.

The amendment would fix problems with the wording — especially the word “electors,” defined in law as all eligible voters — because as written, the measure would prevent the city from ever again incurring “full faith and credit” obligations even if voters approve. An absolute majority in favor of a money measure has never been achieved in a local election and is forever out of reach.

You can read the complete ordinance draft in the Monday council agenda on cityofalbany.net. The council’s approach looks reasonable — at least to me — because it honors the intent of the voters and avoids going to court. (hh)

City Councilor Ray Kopczynski responds: “The council’s approach looks reasonable — at least to me — because it honors the intent of the voters and avoids going to court.” That IS the intent – to avoid having to go to court.  Litigation would take a LOT of time & a LOT of money…  If someone doesn’t beat me to it, I will be suggesting that the collaborative work group (as suggested by Tom Cordier) definitely include him to help formulate some of the undefined definitions to try and bring them into the realm of what would be legal as per the Oregon Constitution and what the bond attorney so eloquently outlined in an hour-plus discussion.  As you yourself pointedly asked him that evening, even the re-funding of the water bond issue would not have had the same result subject to the way the current measure requires…

Tom Cordier responds: It appears a decision was reached at the Council’s exec. session on 3/27. My understanding is that discussions can be held in private but that decisions are to be made in public. It seems like two competing ordinances should be placed before the Council to show choices available. Because only one is presented it looks like the decision is already made-in exec session.
If the Council promises to abide by the language for an interim period–they should say the measure passed. Unless they do that there is no significant driving force to refer another measure (requiring voter approval of increasing debt including revenue bonds) before the voters in November. That choice should be placed before the Council.