Another try for ‘The Banks’ apartments 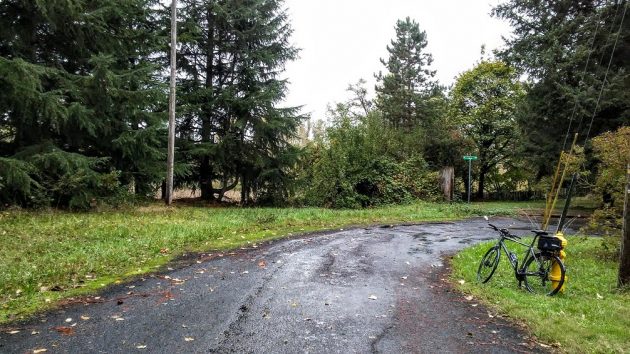 The corner of Linn Avenue and Chicago Street on Sunday. The Banks apartments would be built to the left and behind these streets.

Despite neighborhood opposition, developers of “The Banks” apartments are not giving up. They are initiating a new land-use application for a complex of 120 units, the same plan rejected by the Albany Planning Commission just a few weeks ago.

The Albany Development Code requires developers of apartments next to single-family zones to hold a neighborhood meeting before filing for approval of a site plan. The Keizer planning firm representing Salem-based Willamette River View Holdings, the developers, has scheduled such a meeting, to be held online via Zoom, Tuesday night. The firm sent invitations to property owners within 1,000 feet of the 6.7-acre site of their project, on the Willamette River across Geary Street from Bowman Park.

Even though there was strong opposition from the quiet neighborhood of modest and mostly older homes south of the site, the planning commission approved a site plan and related permits for 105 units of The Banks in July 2019.

Then the developers found that their plan was no longer feasible, and they filed for a modification of their approved plan to change the layout and increase the number of units to 120. The city planning staff approved the change, but the neighbors appealed, and on Aug. 31 the planning commission rejected the request. The commission agreed with the opposing neighbors that the changes did not qualify as a modification but amounted to a new plan.

So now, River View Holdings is pushing the 120-unit plan as a new application rather than a modification. The site plan shows eight three-story buildings with a total of 120 units plus a clubhouse and 218 parking stalls.

Since the city planning staff has already concluded that the plan for 120 units meets the requirements of the development code, the city will have little choice but to approve the application once it filed.

The problem the neighbors face is the zoning of the land where the apartments are planned. It is zoned RM or “medium-density residential,” allowing up to 25 dwellings per acre.

Dala Rouse is a longtime homeowner in the neighborhood and a planning commissioner. She recalls that in about 2003,  the city intended to make the entire neighborhood RM. The people living there fought that and won, but for some reason the former Permawood industrial site ended up as RM.

When you look at it now, it’s hard to see apartment blocks as the best use of that partially wooded land near the river and the neighborhood to the south. But who knows what motivated the planners and decision makers 17 years ago?(hh)


6 responses to “Another try for ‘The Banks’ apartments”