Another train: Industry on parade

Albany has been a railroad town since the century before the last one. Residents get plenty of chances to watch trains go by, as I did again on Wednesday at the Burkhart Street crossing for pedestrians and bikes. The train was short, but it still had something to say to watchers like me.

The crossing is on one of my bike routes. For people on foot or on a bike, it’s a handy shortcut from Salem Avenue to the Willamette Neighborhood, which I count as part of my riverfront beat.  There are stop signs at the crossing but not gates on this path. So it is useful to look right and left before crossing the two tracks, the Union Pacific mainline and the one the Portland & Western uses to reach its Millersburg yard and points north.

If the train had something to say, what was it? Well, as it happened, that freight you’re watching on the video represented a partial sampling of the output of Oregon’s wood products industries. There were a couple of cars carrying what looked like telephone poles, several cars with milled and packaged wood products, plus a bunch of cars carrying logs. I’m pretty sure the logs were bound for the Columbia River to be loaded on a ship for export to the Far East.

We’ve lost a lot of mills over the years, but it’s worth remembering that Oregon forests still account for a significant share of our economy. And the rail system, what’s left of it, still keeps a lot of freight from clogging the roads. Railroading and our natural resource economy — long may they last. (hh) 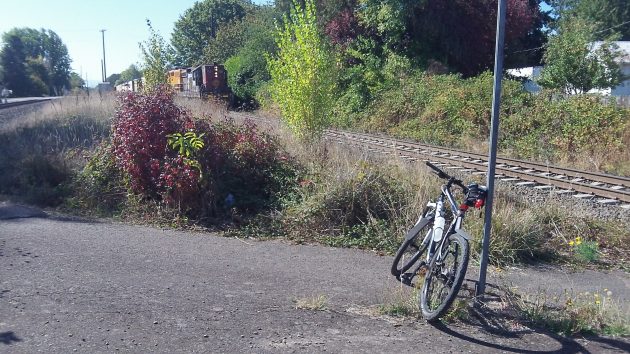 A Portland & Western freight approaches the Burkhart Street crossing as it heads for the  Millersburg yard.

5 responses to “Another train: Industry on parade”