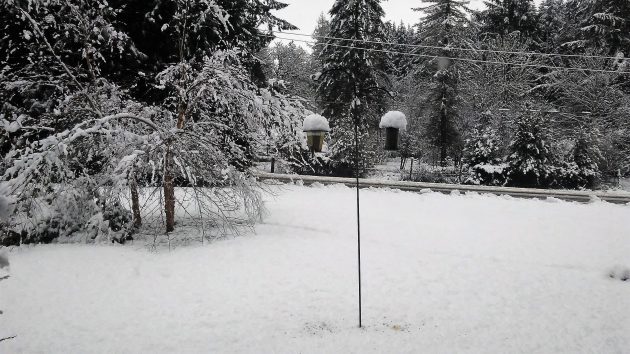 North Albany on Monday morning, less than a week before the official start of “summer time.”

The insanity of our semiannual time changes has long been established. No additional proof is needed, but we’ll get it anyway on Sunday.

Sunday morning is when Oregon is supposed to begin what long ago used to be called, at least by some people, “summer time.” But obviously winter won’t be over. According to the calendar, winter will have more than another week to go while “summer time” is in effect.

The weather, too, is unlikely to allow us to make much use of the extra hour of daylight we’ll be getting in the afternoon. The long-range forecast for the weekend predicts — surprise! — cloudy skies and rain, with lows in the 40s and highs in the low 50s.

Since it cannot be demonstrated that switching from standard to daylight saving time in March, and back again in November, does any good or saves anything, especially not electric energy, why do we keep doing so? Beats me.

Some time ago, a proposed Oregon ballot initiative to cancel daylight saving time fizzled out before it even got started. Since then nobody has successfully urged our lawmakers to take matters into their own hands. A search of bills introduced in Salem this session shows not a single one dealing with daylight time. And our lawmakers in Congress appear no more interested than those of the state.

So once again, we’re going to lose an hour of sleep, giving it up with no more than a whimper to the faceless forces of the all-powerful state. Let’s just hope it doesn’t get worse — that the forecast proves right and there isn’t more snow. (hh)