Another sunset? Give it a rest! 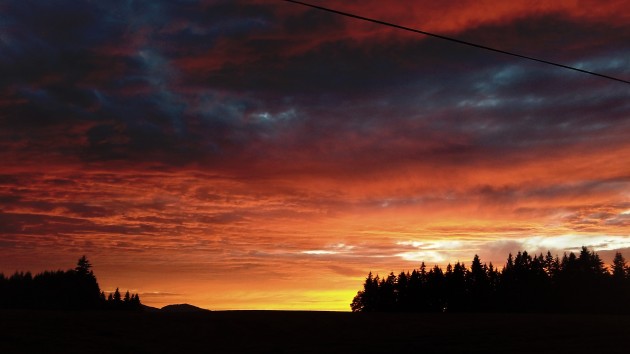 Every time the setting sun turns the clouds red or otherwise makes the sky look good, social media explode with images of the phenomenon. It’s as though people had not already seen the sunset if they were awake. And in case they hadn’t, it’s as though we picture takers think our snapshots can possibly do justice to the real thing.

Maybe this tendency to load the Internet with images of colorful clouds will fade with time. We can hope that the American public will some day tire of letting the world know what the sky looked like from their yard, their front porch, out their window, or from where they stopped by the side of the road to point a camera toward the west. But there’s no particular reason for optimism on that score. People, after all, have not yet matured beyond the point where they regale their audience with selfies of funny faces, or pictures what they had for dinner, or that they played golf. And oh, look at how cute our those kids were today!

Here’s some unsolicited advice. Knock it off!

Facebook and other social media can prove useful from time to time. Sharing news is one example, especially in emergencies. Long-lost friends can go online to find each other. The other day a missing teenager from Clark County was found in Oregon, and maybe even rescued, reportedly because of Facebook messages. That’s all good. But sunsets, allegedly funny videos, or dogs sleeping in cute positions? Nobody cares!

Some users get fed up. Now and then they announce they will give up Facebook for a week. Good for them. Of course that means they’ll miss out on the next colorful images when the sun goes down again. (hh)


5 responses to “Another sunset? Give it a rest!”