Another rail crossing to avoid?

If Santiam Road on Tuesday is an example, the notorious Queen Avenue railroad crossing is not the only place in Albany where train operations sometimes cause long delays.

On Santiam Road, a freight train on the Union Pacific main line and powered by UP locomotives blocked the crossing for about half an hour while an Albany school bus and dozens of other vehicles waited on the west side of the tracks. Drivers of other vehicles, including a second school bus, waited a short time but then took advantage of the Carriage House Plaza driveways and parking lot to turn around and head the other way.

As the video above illustrates, a school bus was first in line at the crossing. The driver of the empty bus was Helen Jacobs. When I talked to her at about 3:10 p.m., she told me she had been waiting 11 minutes. She and others were stuck there another 20 minutes while the freight shunted back and forth a few times. Eventually, the freight started rolling north and cleared the street at about 3:30.

The bus driver, who has served as head of the classified employees union in the Albany school district for 15 years, said this kind of delay has been happening there more frequently lately. From Santiam Road, we couldn’t see what was going on at the tail end of the train. But we assumed it was dropping off or picking up cars in the Albany yard nearly a mile to the southwest.

Train crews can’t help it. They have a job to do. But as motorists learn from experience to avoid certain Albany grade crossings in addition to the one on Queen, this may explain why the viaduct on Pacific is getting more crowded during the busiest parts of the day. (hh) 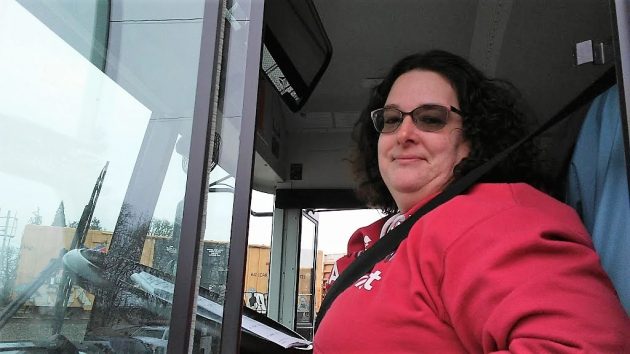 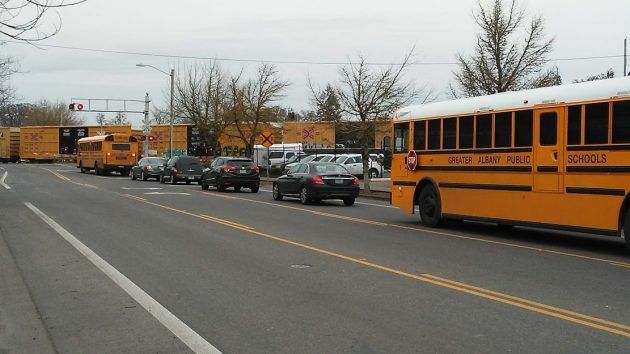 A second school bus joined the queue before its driver turned into a parking lot to the left and headed in the other direction.

2 responses to “Another rail crossing to avoid?”