Here’s an example of how drivers might get into trouble — although this one didn’t — at the Geary Street railroad grade crossing. 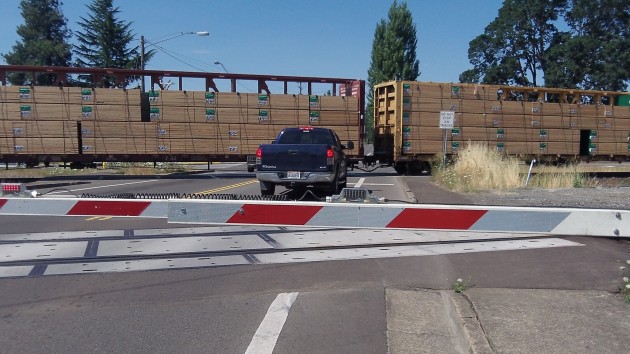 The street is crossed by two tracks, the Union Pacific mainline and a Portland & Western track. There is one set of crossing gates. Afew feet north of the rail crossing, northbound traffic on Geary has to wait for vehicles on Salem Avenue, and when there’s lots of traffic on Salem, vehicles may form a line on Geary that extends across the two tracks.

As result, when a train comes trundling along, the gates may well go down behind a vehicle that is trapped; it cannot move forward without running into other vehicles in front; it can’t back up because the gate is down and there are vehicles waiting there as well. If the driver heeded the signs and did not stop on the tracks, as in the video, no harm is done. But it’s still unsettling to pull up to a crossing gate that is down and see a vehicle standing on the wrong side of it.

And by the way, in case no one has noticed, one of the flashing lights off the northbound lanes of Geary seems to have burned out. Only one of them was flashing Tuesday, as you can see on the video. But as you can hear, the bells were working just fine. (hh)


One response to “Another rail crossing “adventure””