Another place for spending old age 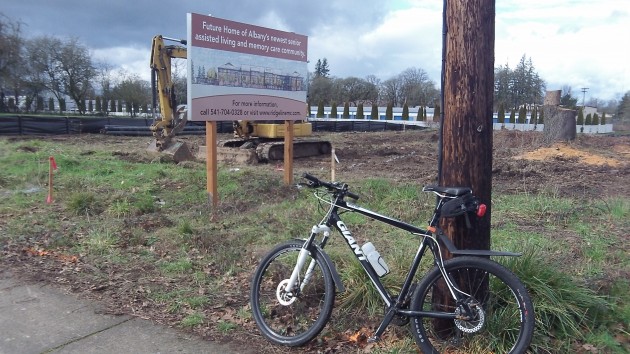 Seeing the sign caused me to stop on my ride Saturday afternoon.

The numbers of living units designed for old people keep growing for an obvious reason: There are more and more customers for that sort of arrangement and care. In Oregon, the population aged 65 and older jumped — although this may be the wrong word picture — nearly 22 percent from 2000 to 2010, making it the fastest-growing age category in census reports.

Albany’s increase in that age group was even faster, an astonishing 26 percent, also the fastest growth rate among all city residents. So there’s no surprise that an enterprise has filed for city permission to build another new complex for people who need “assisted living” or “memory care.”

Ridgeline Management Co., based in West Linn according to its website, plans to build and run a three-story complex at 2853 Salem Ave. S.E. in Albany. The project needs a conditional use permit, and the city planning commission will hold a public hearing at 5:15 p.m. Monday, Feb. 1, at City Hall.

With 73,000 square feet of interior space on a 2-acre lot, the building will have 70 units for assisted living and 21 for Alzheimer’s patients. It will have 41 parking spaces for cars plus six for bikes.

This kind of building needs a conditional use permit in the medium-residential zone where it is planned. A similar project at the same address was approved in May 2007 but never built, and the approval expired three years later. (I don’t know if that project was proposed by the same company as now.)

Albany yellow pages list five assisted-living facilities, including the Mennonite Village and the latest addition, Bonaventure. Work on the Salem Avenue site has started, as I could not help but notice as it is on one of my bike routes and I rode past it Saturday after being away for a couple of weeks.

Ridgeline says its website it also has senior-living places in La Pine and two in Springfield, along with others in California, Colorado, Indiana, Michigan, Nevada, Texas, Wisconsin, and Wyoming. Its website says assisted living, averaging $3,200 a month for a one-bedroom apartment in Oregon, is less expensive than other alternatives for care. It doesn’t give the price for memory care, but presumably it’s more. (hh)


7 responses to “Another place for spending old age”