Another place for help with life 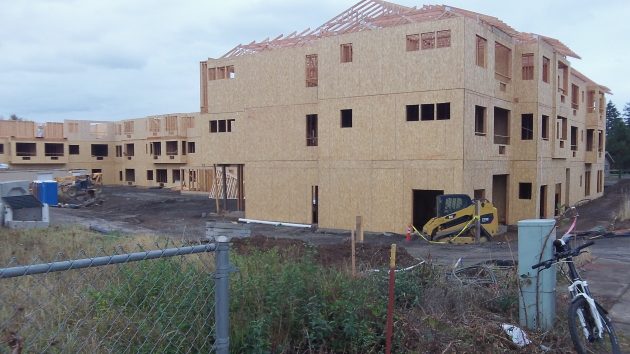 As seen on Oct. 3, Waverly Assisted Living is under construction at 2853 Salem Ave. S.E.

Looking at the massive construction project on Albany’s Southeast Salem Avenue, your first thought may be: “Wow, that’s a lot of wood.” In a matter of months the place known as Waverly Assisted Living will become home for up to 98 people who are getting up in years.

After site work was done early in the year, the three-story, 73,000-square-foot complex has been under construction since July. The Albany building permit values it at nearly $11.8 million, and the city fees alone amounted to $443,700.

When will the place be finished and ready for tenants to move in? “We don’t have an opening date yet,” said Keely Raff, the director of sales and marketing for Ridgeline Management Co. She spoke to me Monday from the company office in West Linn and said she expects to know more after a meeting at the end of October to review the status of the Albany project. They had been hoping for a completion date some time near the end of the year.

The complex, at 2853 Salem Ave. S.E., will provide 24-hour care for people in 91 apartments. Seventy of the units are intended for “assisted living” and 21 for people needing “memory care.”  The first floor will be mainly common areas, including exercise space and a coffee shop.

The company, Raff told me, is getting calls every day from people asking about, the project. With the way our population is changing, there’s a growing need for accommodations of this type, and she notes that this one, on a major thoroughfare, is in a highly visible spot.

Ridgeline manages about 20 homes of this type in nine states, including three in Oregon, in Springfield, Medford and LaPine. (hh)


10 responses to “Another place for help with life”