Another crossing and another train 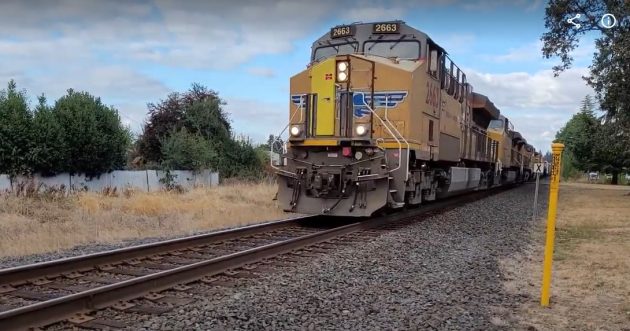 I got to the crossing just before the Union Pacific did.

As you may have gathered by now, I have a thing for trains. So when the gates at a railroad crossing go down just as I get there on the bike, I welcome the delay so I can watch. Or try to get a video, like this one:

This freight came through Albany a few minutes past 6 on Sunday evening. It seemed to be about the same length as one that I watched and recorded just a few days ago, on Monday night the 16th.

When watching freight trains as they rumble through town, I often wonder what’s in those cars that you can’t see into. In this train, many of the cars appeared to be empty, though I can’t be sure of that.

If you pause the video at the right time, you can see that some of the tank cars had labels bearing the number 1075. That’s a code for a flammable liquid, liquified petroleum gas.

One of the first stories I ever reported as a novice newsman in Los Angeles was about an effort by people to get trains not to blow their horns when coming through their neighborhood in the San Fernando Valley. That was 56 years ago, and I don’t remember the outcome, but I’ve been interested in railroad issues every since.

Albany has been a railroad town for close to a century and a half. Let us be reminded of this important aspect of local history when we watch a modern train go by. (hh)


2 responses to “Another crossing and another train”