Angled parking: Long way off, if ever 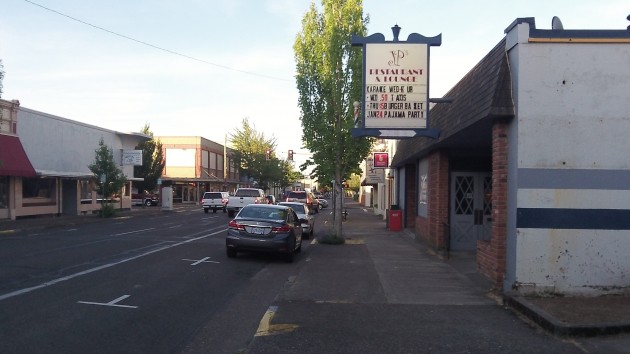 Don’t hold your breath for angled parking to come to the streets of downtown Albany. As I reported at the time, the idea got a fleeting mention during a meeting of the downtown urban renewal advisory committee on June 9. But that’s about all so far.

As near as I can tell, neither the city council nor the Central Albany Revitalization Area board, which includes the council and seven others, has required anyone to do anything specific about angled parking.

CARA did, some time ago, ask the city’s Public Works Department to come up with “streetscape” plans and cost estimated for several downtown streets including Second Avenue. Ron Irish, the go-to source at City Hall for anything having to do with streets, told me a few days ago that he understood the survey work was nearly done but engineering had not started. Also, “CARA didn’t direct us to look into angled parking when they asked for the streetscape plans to be developed.”

The topic of downtown parking comes up because Novak’s, the famous restaurant, is rebuilding an old storefront at 208 Second and plans to move there this summer. Unlike its present home off 14th Avenue, the new site has no parking lot, and customers will have to park on Second and nearby streets.

Irish said other businesses also have expressed parking concerns. “They have asked (or are in the process of asking – I’m not following this closely enough to know) that CARA consider whether or not the streetscape plan being done for Second (Washington to Ellsworth) include angled parking on one side by using a design similar to what’s currently planned for around the post office,” Irish wrote.

Irish sees a number of possible effects of angled parking on one side of Second. Among them: There would be an increase of 22 spaces in the three blocks between Washington and Ellsworth streets. But the speed on Second would be drastically reduced, perhaps to 10 mph or less, and a travel lane would be lost. Angled parking would raise the cost of sidewalk improvements because of changes in curbs and drainage. The front end of cars would hang over the curb, so there would be less space for benches or street lights. Also, more congestion (cars backing into traffic when leaving), and problems for bicyclists as the bike lane would likely disappear.

There is, as Irish mentioned, a plan to install diagonal parking on the streets around the downtown Albany Post Office, but that plan is tied to the expansion of the Albany Carousel building, and the timing is uncertain.

So, if you’re hoping to visit Novak’s once it’s open on Second, or any of the other businesses on that and surrounding streets, learn to parallel park and walk a few yards, maybe even around the corner. And if the council wants angled parking to be pursued, which would probably advance the city’s urban renewal goals by making life easier for many people, members had better take a vote to direct the staff to prepare definite plans. (hh)


8 responses to “Angled parking: Long way off, if ever”