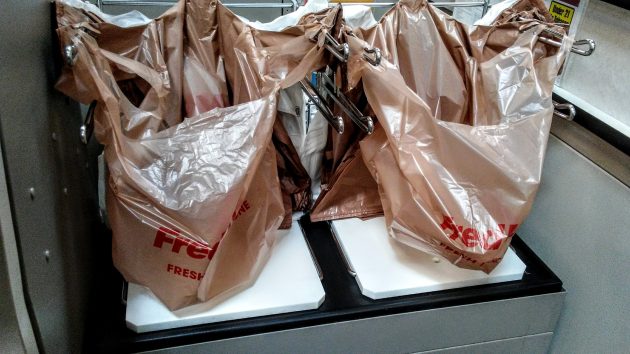 At Albany Fred Meyer today, you had the choice of plastic or paper bags, or your own if you brought one.

A reported shortage of paper bags has caused some Oregon supermarkets, including Fred Meyer in Albany, to offer customers plastic bags again.

The 2019 Oregon legislature outlawed so-called single-use plastic shopping bags, and they’ve been gone from stores since the first of the year. Retailers were allowed to offer paper bags but must charge a nickel for each.

But then, because of the corona crisis, some retailers such as Bi-Mart asked customers not to bring reusable bags into their stores. And others, such as Fred Meyer, required people bringing their own bags to bag their groceries themselves.

Critics of the plastic bag ban last year said, among other things, that reusable bags would increase the risk of contamination and germs. Retailers’ reaction during the corona crisis was in line with that.

The Oregonian reported on May 30 that the reluctance to accept reusable bags increased the demand for paper bags and, combined with corona-related problems in the supply chain, caused a shortage.  The paper quoted Liz Merah, a spokeswoman for Governor Brown, that while the plastic ban has not been repealed, “grocery stores are permitted to use plastic bags if they run out of paper bags.”

There’s no word on how long this exception will be allowed. So if your home supply of plastic shopping bags is running low, now might be the time for stocking up again. But maybe not, considering that they now want a nickel each for bags that used to be free. (hh)