And the message here is … what? 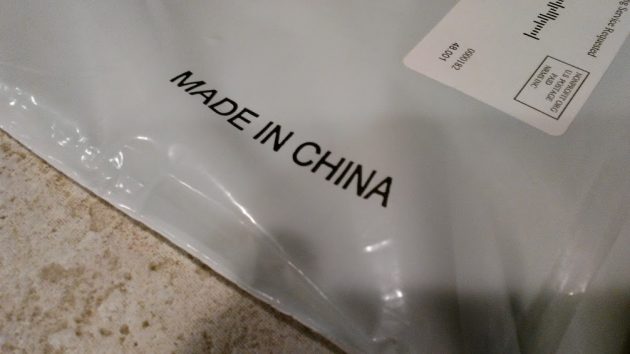 There’s something perplexing about this plastic wrapper, isn’t there? It contained a shopping bag, also made of plastic, and also China-made.

“Subscribe Now And Get 11 Issues for $12 Plus A Free Tote Bag.” That was the offer from Smithsonian Magazine. We’ve become so used to many things coming from China that if a free tote bag and its wrapping come from there too, nobody gives it a second thought.

But now? During this pandemic? And in big type, right on the front of the mailing wrapper? What are the makers of this bag trying to say? What’s the message we’re supposed to get?

“Look, weird new coronaviruses are not the only thing you get from us,” the mailing seems to say. “We also send you harmless stuff, like this plastic thingy. See?”

China adopted its “National Sword” policy in 2017, banning the import of almost all waste for recycling, including plastic. The new policy took effect in 2018. You may remember the problem this caused for Republic Services in the Albany area, and for other waste haulers providing curbside recycling services across the United States.

In principle, no one blames the Chinese government for not wanting to keep accepting much of the world’s trash. But what was our response to Beijing?

“OK, guys, if you will no longer take our plastic for recycling, which we understand, then of course we can no longer allow our corporations to import plastic stuff from China. Because we don’t know what to do with the trash.”

Did we say or do anything like that? No, we did not. Except for imposing tariffs in an overdue attempt to reform the China trade, we just kept buying and accepting the stuff they sent.

Even plastic tote bags that come as gifts. (hh)