And once again, those tower clocks… 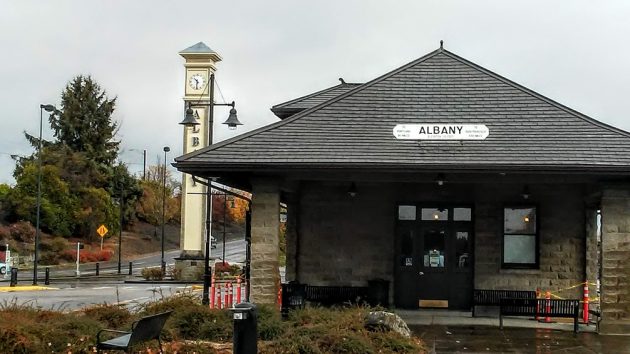 It was 10:45 a.m. Tuesday when this photo of Albany Station was taken.

Keeping the clocks in the tower at Albany Station showing the right time may prove to be harder than it should.

All the clocks had been wrong for some time, but then the Foress Sign Co. fixed them. That happened on Oct. 28. And just a few days ago the city reported that the bill for the repairs had been unexpectedly low, little more than $600.

But today (Tuesday, Nov. 10) reader Lindell Johnson let me know the the clocks were off again. It was she who had  pointed out the clock problem last month, prompting a little story on this site.

I went and checked, and sure enough, the clocks facing east, south and west were slow 10 to 15 minutes. Only the one pointing north, toward the Lyon Street underpass under Pacific Boulevard, had the correct time, which at the time I looked at it was 10:48.

I emailed the city to ask about this, and Tom Valentino, maintenance supervisor for city facilities, responded right away.

He went out and reset the three clocks that needed it. He told me he wasn’t sure what caused them to be slow. “We will keep an eye on them,” he said. “If they get off again I will call Foress back to look at them.”

The clocks are a nice feature. The Greater Albany Rotary Club donated $40,000 to have them added to the tower when it was built in 2007. Let’s hope they don’t turn into a continuing problem that defies being fixed. (hh)

I corrected the original version of this story, which as a commenter below pointed out had the wrong location for Foress Signs. 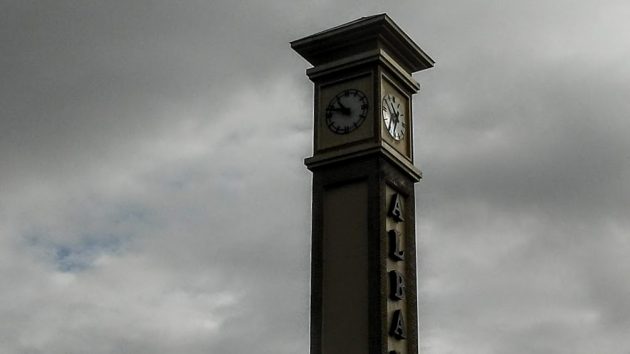 As the north-facing clock shows, it was 10:48 when I shot this photo against a cloudy sky.


7 responses to “And once again, those tower clocks…”