And now, the wait begins again 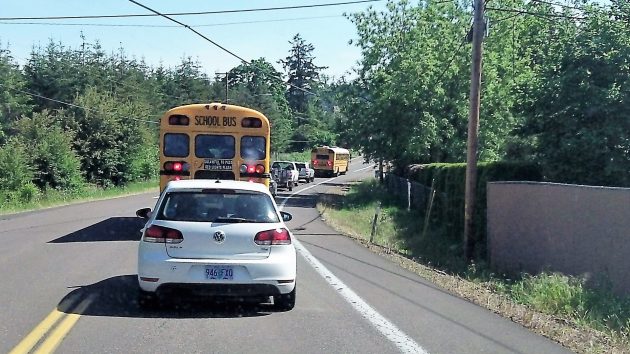 At the start of another school bus season, how about a small plea, self-serving though it may appear? Hey kids, try to show a little hustle when you’re getting on and off the bus.

We’re all familiar with the traffic law on school buses, and a sensible one it is: No passing, in either direction, of a school bus that it loading or disgorging children. Now and then some heedless but potentially murderous motorist violates the law and blows past a stopped bus. Those drivers are a menace, and if they can be identified, they should be charged and called to account.

So from shortly after Labor Day through the middle of the following June, most of us obediently trail those yellow buses as they make their stops every two or three blocks on our two-lane roads. And when you made the mistake of cutting it close with your schedule, don’t be surprised if your fingers start drumming on the steering wheel. That’s when it seems that kids sure take their time as they get on the bus, find a seat and sit down.

And you wonder: “Were we that slow when we were their age? Seems like we had more energy and even broke into a jog from time to time, if memory serves.”

Memory — let’s admit it —  may not serve us well. Still, we’d probably get less impatient less often if today’s crop of school kids moved on the double when they get on and off the bus. (hh)


11 responses to “And now, the wait begins again”