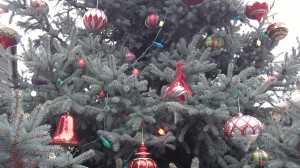 An outdoor Christmas tree in Oregon, where the good news is that winters are generally mild.

For weeks now people have been wishing each other “Merry Christmas” or “Happy Holidays” or some such thing. The phrase has become as common a “Have a nice day” and sounds about as sincere. I realize that people mouthing the words mean well, or at least they don’t mean to be a nuisance. Still, you’d think the Christmas holiday would mean more to individuals if the buildup to it did not seem to last — in public anyway — for more than a month.

Christmas always brings forth memories of childhood. In my case it’s associated with freezing on an arctic scale. When we were little kids in Berlin, my sister and I would fill glass bottles with water and hang them from the bars outside the bathroom window of the apartment where we lived. Then we would wait — usually just a few minutes, it seems to me now — and listen for the “Crack!” as the ice made the bottles explode.

Bitter cold — that’s one of the things I recall every year when Christmas rolls around. And yes, there was the time my sister and I got a scooter with balloon tires for Chistmas and took it out late on Christmas Eve along with a ruler — both of us bundled up against the cold — to measure the depth of snow on the streets.

There were several tennis courts behind the apartment block. In the winter they would turn a hose on one section. With borrowed skates clamped to our shoes, we sometimes got to use this rink. But what I remember most was standing at the fence surrounding it and freezing to the point I couldn’t feel my feet. Maybe that explains why in recent years, the orchestrated alarm about global warming has cheered me up no end. If the alarmists are so fond of cold, let them spend a childhood within reach of the Siberian wintertime air.

As I said, the world has been peppering us with Christmas-this and holiday-that for weeks. Now that it’s at hand, I hope you can spend it with family or other people you like — and in a warm place. (hh)

From Shawn Dawson: I have similar memories from my childhood (1970’s) when we spent some time in Anchorage, Alaska.  The playground was asphalt, but in the winter, the Fire Department would come and hose it down to create an ice rink.  In the hall outside the classrooms, all the student’s skates were lined up, and during recess we would skate.  It’s a wonderful memory.  I wonder if the schools still do that in Anchorage?