And now, as for those lids… 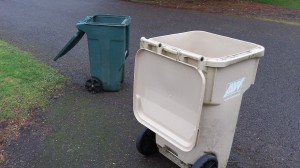 After the disposal truck has come by…

There are big problems in the world. I don’t have to tell you that. And then there are little things, not all that serious, but who says they don’t deserve being mentioned now and then as well? So let’s take a look at why trash cans fill with water.

They fill with water when it rains because their lids have been left open. They are open because of advances in trash collection. Thirty years ago on trash day, the guy from the disposal company would come around, pick up your trash can and dump it in his truck. Then he would put it down where he found it and jam the lid back on.

But time marches on, and there’s no stopping progress. Picking up the trash has been mechanized, at least by the big companies that now do this job. Republic Services provides the service in most of Oregon’s Linn and Benton counties. It used to be Allied Waste, until Republic bought it. Before that it was Albany-Lebanon Sanitation and Corvallis Disposal, before that company was absorbed by Allied Waste. But I digress.

The Republic trucks come around once a week, without fail. They have a mechanical arm that reaches out, grabs your trash bin, lifts it up and turns it upside down to empty it into the truck’s copious hold. Then it slams the bin back on the ground, and the truck moves to the next house, leaving nothing behind except a little oil slick where it stopped. What it fails to do — as often as not — is to close the lid on the now empty can.

Suppose it has been raining off and on all day. The homeowner gets home and what does he find? An inch of water in the bottom of the can — not just in the trash container but in the recycling bin as well. Unless he wants next week’s old newspapers and cardboard to turn to mush before they can be recycled, he turns the containers upside down and pours the water out.

Suggestion for the next advance in waste disposal: Develop a can that, after it’s emptied, closes itself. (hh)

From Ray Kopczynski: It may[?] be more simple than that – have multiple drain holes in the bottoms of the cans.  A few of those placed strategically by design would accomplish the task and not cause any lessening in inherent strength of the containers.

From Howard Wright: A side note, here in Lincoln County cameras are installed in the garbage trucks and if you try to recycle something you aren’t supposed to, they will call you on it. I think it also provides proof that your can was at curbside. I can’t imagine another reason for the camera but there is a screen inside the truck that the driver monitors.

From Charyse Appledoorn Hill, via Facebook:  Or when the mechanical arm gets the lid caught on the truck and rips it off.

From Steve A. Brown, via Facebook: Good suggestion drilling a number of well placed drainage holes in the bottom of the can. We are constantly finding our bins with water in them. I wonder if Republic would mind if I drilled them myself?
Posted in: Uncategorized