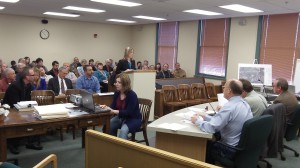 The Linn County commissioners listen to the staff report on the land use request by the Harrington quarry south of Sodaville.

Somewhere around 30 million years ago, during the tertiary period in the geology of Earth, a volcano rose in what today is the middle of Oregon’s Linn County. Time marches on, and for the last half century the Harrington family, which owns more than 200 acres of forest and ranch land in that very spot, has been digging up and crushing the igneous rock left by that volcano on one-tenth of their land, providing material for roads and other construction projects in nearby Lebanon and other parts of the area. They say their present mining site is about played out. To continue their business, they need official permission from Linn County in the form of land use changes and from various state agencies in the form of permits.

The Linn County Board of Commissioners held a public hearing on their request Wednesday morning, and Norman Rockwell could have painted the scene. Some 40 people crowded into a courtroom in the courthouse. Lawyers, farmers and ranchers, neighboring homeowners, the administrator of nearby Sodaville, the principal of Sand Ridge charter school — all trooped to the podium to state their views. Some backed the request, others were against. Dust, truck traffic, the noise of blasting and crushing, fumes from making asphalt, and what about any risk to Sodaville’s wells? Those were some of their concerns, and the record shows they have been or are being addressed.

Two central points seemed to me to be overlooked: One, the applicants say their operation, going on since 1962, long before most of the neighbors arrived, will not increase; they’d just like to continue. The other is that whatever they do on the site needs to meet stringent standards under permits from the state.

The county will decide the land use matters by March 6. This is a small and useful family operation. The county has no reason not to grant their request. (hh)