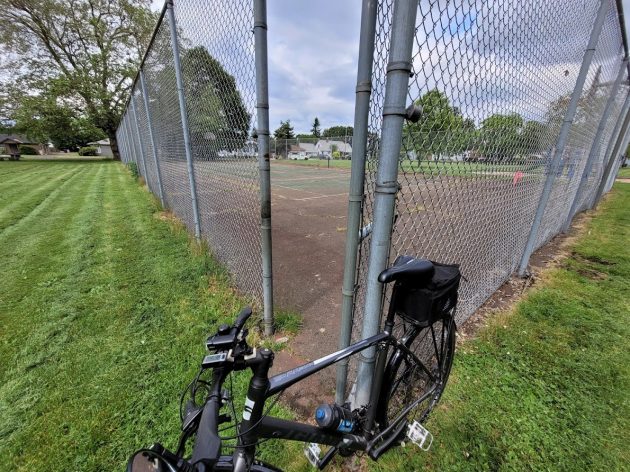 The old tennis court at Burkhart Park on June 13. The city is buying a “fitness court” for the park.

From time to time, the bike takes me past Burkhart Park in Albany, which features a playground, an abandoned tennis court, a couple of hoops and plenty of grass. Soon it will have something else, an outdoor “fitness court.”

The park lies at the south edge of the Willamette Neighborhood, between Fifth and Sixth avenues and west of Burkhart Street. On June 8 the city council approved a proposal by Albany Parks and Recreation Director Kim Lyddane to purchase a fitness court for the park.

Developed by National Fitness Campaign LP, the court amounts to an outdoor gym. It consists of a number of permanently fixed pieces of apparatus, from simple steps to rings and chin-up bars.

The company has patented the design and is the only one that sells it. So the council authorized the parks department to buy the installation under a “sole-source procurement method,” meaning without competitive bidding.

The project is costing $155,000, Lyddane told the council in a memo. The company is giving the city a $30,000 grant toward the purchase, which amounts to a discount.

Albany is using $105,000 in community development block grant money for the deal. The remaining $20,000 will come from a park maintenance account.

It’s not clear whether the installation is intended for the hard surface of the former tennis court. Lyddane’s memo mentions a concrete pad for the project that will need to be completed.

“The outdoor fitness court will provide needed improvement to the park and will help community members paticipate in positive, heathy activities,” the parks director told the council.

“Community members?” Which “community” would that be? Presumably she means “the public,” that is anyone who wants to use the equipment.

National Fitness Campaign has a website. Look it up if you want. Then wait for word on when you can visit this fitness court, try the equipment and see how your fitness improves over time. (hh)

The image of a fitness court is from the website of the National Fitness Campaign.


10 responses to “An outdoor gym for Albany’s Burkhart Park”