An inspiration, but then… 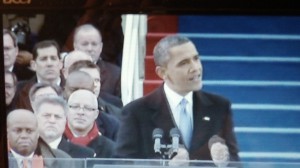 Listening to President Obama’s second inaugural address, it was easy to be carried away. Taking his theme from the Declaration of Independence, he told his fellow citizens what those hallowed words mean to him today. It was an inspiration — unless you got stuck in the details.

For example, the president said: “We will respond to the threat of climate change, knowing that the failure to do so would betray our children and future generations.” The fact is that the Earth’s climate is always changing, and smart civilizations will adapt, but judging by the actions of his Environmental Protection Agency, that’s not entirely what the president has in mind. He wants to influence climate change or stop it, even if the response makes people pay higher prices for heat and destroys their ability to make a living.

He also touched on what people earn: “Our journey is not complete until our wives, our mothers and daughters can earn a living equal to their efforts.” Of course, but they can do that now. Equal pay regardless of gender is federal law, and what more does he propose?

In the spirit of equality before the law, which everybody is for in principle, the president called even for equal love: “For if we are truly created equal, then surely the love we commit to one another must be equal as well.” He was talking here about gay rights, specifically about gay marriage. But why bring love into it? What does the federal government know about love? Where does it say in the Constitution that love is the basis on which the president should base policy or the Congress should make laws?

In short, it was great to listen to the president talk and to be inspired by his delivery and his tone — as long as you didn’t pay too much attention to the words themselves. (hh)