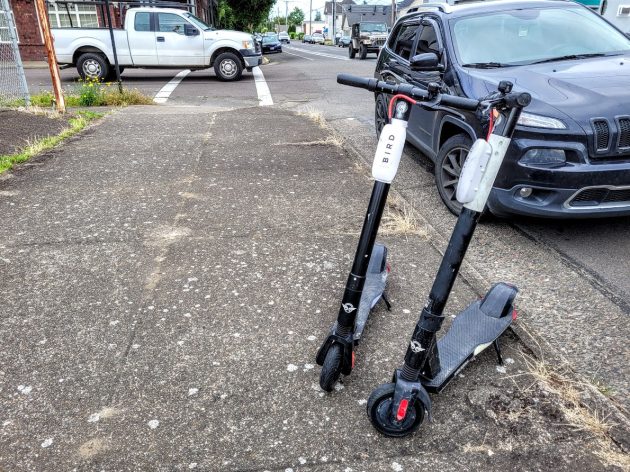 These Bird scooters were parked on East First Avenue near Montgomery on Wednesday afternoon.

A month and a half after the Bird company’s electric scooters arrived in Albany, how is this experiment in “urban mobility” working out?

April 27 was the first day the scooters were available for rent in Albany. Since then, there have been only a few times when I have seen someone riding one of them. Most of the Bird scooters I see around town are sitting somewhere, ready and waiting to be rented.

I’ve not been able to find out how often the Bird scooters in town have been used, or by how many people.

But in a statement provided by its public relations manager on June 8, Bird reported, “We’ve been happy to see residents quickly adapting to the new, eco-friendly transportation option with over 6,000 miles ridden in Albany to date.”

According to the company, about 50 Bird scooters are deployed in Albany. And while most scooter trips cover less than five miles, the longest ride in Albany so far, as of June 9, went for 12.9 miles.

When the program started, some people worried about accidents because the scoooters can hit impressive speeds. But the company said it was not aware of any crashes.

I’ve not tried using one of these things myself. For one thing, when I’m on the bike, why would I need a scooter?

For another, though, I’m not sure about how to use the required app. Mine keeps saying “group ride,” which is not what I want. (hh)