An Albany scene: They’re working on it 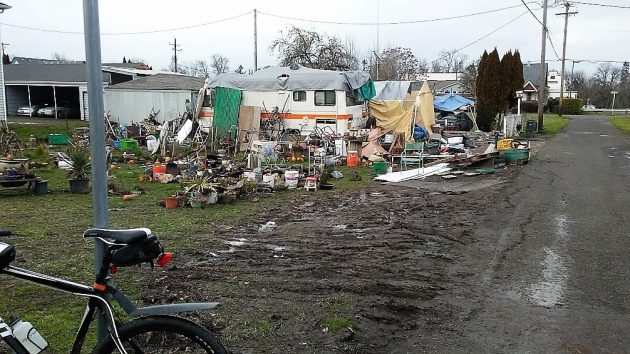 The northwest corner of Second Avenue and Thurston Street in Albany on Jan. 9.

This collection of stuff off Albany’s Second Avenue and the Thurston Street canal is not going to mar the Central Neighborhood much longer. At least that’s the word from City Hall.

Junk and trash are not, sad to say, all that rare in Albany, but this accumulation at 122 Thurston St. S.E. seemed out of the ordinary when I saw it on Wednesday while riding past on the bike.  I asked Marilyn Smith at City Hall about it because she’s part of an informal “code squad” that deals with complaints. She checked with Kris Schendel, a code enforcement officer with the police, and here’s what they told me.

There’s a house behind all that junk, in addition to the RV you see in the photo. The place came to police attention in connection with arrests for drug crimes, strangulation, and assault. There was no electricity, and fumes from a generator greeted officers when they went there on Dec. 20.

The house had been without water service since October, and the toilet was full. Four persons were living in the house and three in the RV. Schendel went there four times in December and this month, urging the people to get water service back on. When they didn’t, the house was boarded up on Jan. 3 under the city’s nuisance ordinance due to drug activity, the assault and strangulation cases, lack of water service, and junk and trash.

Now what? The woman listed on tax records as the property’s owner is dead, and the place now belongs to her daughter. She is reported to be working with the city attorney’s office on an agreement to clean up the property within 90 days, and when that’s done she intends to sell it.

Sometimes, the city pays for a cleanup and puts a lien on the property, hoping to be reimbursed if there’s a sale. But not in this case. “We got an estimate of about $6,000 to hire a contractor to clean it up, but she has agreed to take care of that at her expense instead,” according to an email from Smith.

So with any kind of luck, all that junk should be gone in no more than about three months. (hh) 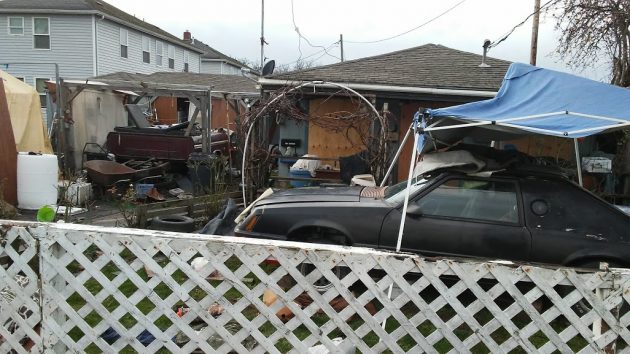 As seen from the Thurston Street side.


18 responses to “An Albany scene: They’re working on it”