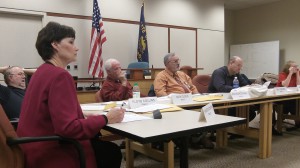 The Albany City Council, seen here in an unrelated work session in December 2012, may eventually have to consider what the words in the initiative mean.

Albany faces a possible complication with a voter initiative coming up for an election in three months. The issue could be explosive, but it need not be if handled with common sense.

The initiative, one of two launched by North Albany resident Tom Cordier, attempts to limit the city government’s debt to the amount that existed on Feb. 28, 2012. Based on the wording of the initiative, its opponents including Mayor Sharon Konopa say that in order to approve any debt, a majority of all the city’s roughly 25,000 voters would have to vote yes. The wording requires an absolute majority, they say, not just a majority of those voting.

If that’s true, then Section 23 of Article II of the Oregon constitution, approved in 1998, also requires an absolute majority to enact the Albany initiative in the first place. No one can remember an absolute majority ever approving any money measure in Albany. So even if the debt-limit measure gets a simple majority in the election — more than half of the votes cast — it still would likely fail. You can see how that would enrage all the people who signed the petition to get it on the ballot.

But I don’t think it needs to come to that. Rereading the debt initiative, I no longer think it requires an absolute majority to approve any debt increase. “Only with the approval of a majority of Albany city electors in a primary, special or general election shall Albany City be allowed to increase indebtedness above the 28 February 2012 level,” the measure reads. There is no comma between “electors” and what follows. It refers to “electors in a primary, special or general election.” The plain meaning, it seems to me, is that it refers to electors who vote in any of those elections.

It is true that the dictionary defines “elector” as “someone who elects or may elect, a qualified voter.” But in the city charter, there already is a provision that relates to this question. It says that annexations to the city “may only be approved by a prior majority vote among the electorate.” Here the dictionary is clear. “Electorate” means “the body of persons entitled to vote in an election.” Several annexations have been approved since this requirement was added, also in 1998. It’s possible they got absolute majorities, but I doubt it, and no one made an issue of it at the time. Clearly it has been the city’s custom to interpret words the way a reasonable person would.

The election on the debt initiative is on March 12. The measure strikes me as a bad policy because no one knows what kind of debt it would limit, and general-obligation debt — the kind that authorizes additional property taxes to repay —  is already subject to voter approval. I hope the measure gets more no votes than yes. If that happens, there won’t be any argument about what the outcome means. (hh)