Alternate route? No, but a nice drive 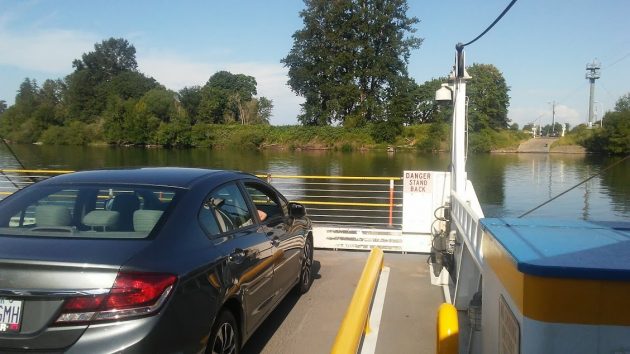 Not an “alternate route” to Albany exactly, but much more scenic.If you signed up for email alerts from the Albany police, you got this “traffic advisory” at 4:19 Tuesday afternoon: “Hwy 20 between North Albany Rd and 1st Avenue limited to single lane traffic due to diesel spill. Use alternate routes.”

This sounded like the spill occurred on the Ellsworth Street Bridge. If it hadn’t, the advisory might have said “between North Albany Road and Spring Hill Drive.”

And if it was on the bridge, there is no practical alternate route to get downtown. That’s the problem that keeps coming up when people complain about the frequent slowdowns and traffic jams approaching the bridge. We need another bridge, they say.

I  got the advisory as as we were about to head into town. Should we wait until there’s an advisory that the spill is cleaned up and both lanes are open? If we had done that, we’d still be waiting, and now the sun has been down for more than an hour and our favorite downtown restaurant, the Taqueria Alonzo, is closed.

Instead, we opted to take a leisurely drive through the wilds of Benton and Polk counties up to Independence and cross the river there. On the way, though, a better idea came along: the Buena Vista Ferry, which runs until 7 p.m.

Here’s an occasion once again to thank Marion County for keeping this operation going in the place where there has been a ferry since the 19th century. With money always being tight, the temptation to close this anachronism must be great. But they have resisted it, and the ferry is still going, providing a service for — I’m guessing here — maybe hundreds of people who use it every day.

The crossing costs three dollars per car, more for a truck. It’s well worth the experience of being carried across the river in five minutes or less.

Back to that advisory. It was the second one in three days. The first arrived at 8:41 p.m. Sunday and reached me out of town. It warned that Scenic Drive and Spring Hill Road were closed at two cross streets. “Due to the recent weather pattern there have been multiple trees and power lines down in the North Albany/Benton County area,” it said.

“Recent weather pattern”? I think there had been a storm that knocked down some lines. Why not say what actually happened? And why not follow up with an advisory when the roads are open again?

Advisories like this could be far more helpful if they were specific and always followed by a timely all-clear.

In the meantime, a suggestion for mid-valley drivers: Take the long way round some time and pay your $3 to the friendly skipper of the Buena Vista Ferry. Even when there’s no restriction on the Ellsworth Street bridge. (hh)


9 responses to “Alternate route? No, but a nice drive”