All that winter rain — could we sell it? 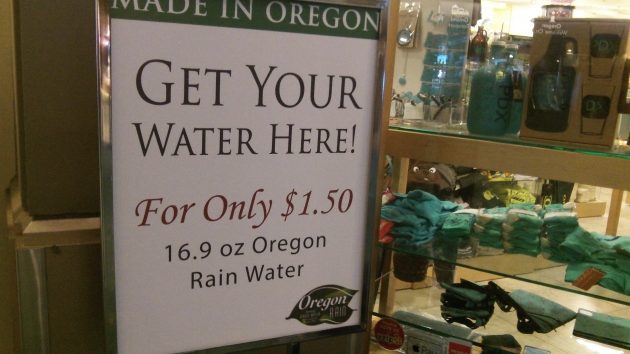 Oregon rain for sale at the Portland Airport: How about scaling that up?

Once again this fall, as usual, we have rain, lots and lots of rain. The Willamette River is running full without doing anybody any good. All around us we have water, way too much water. So when I came across this shot of a sign outside the Oregon store at PDX, taken in September, I had an idea.

Why not sell our surplus water to somebody who doesn’t have enough? Farmers in the Central Valley of California, for example.

Gov. Kate Brown is trying to figure out how to pay for the state government’s always increasing costs. At this point it looks as though state revenues, even through rising, will be more than $1 billion short of what the agencies want for the next two budget years. In California, on the other hand, there’s been news of a budget surplus. So perhaps it’s time for Kate and Jerry Brown to get together and talk about a deal, a water deal.

Oregon owns the “waters of the state.” Try building a pond on your property without getting permission and you’ll be reminded of that. So if western Oregon has more water than anybody needs, what would be wrong with turning the surplus to the state’s advantage?

In the San Joaquin Valley, still suffering from a long drought, farmers blame state and federal politicians for making their water shortage worse or not doing enough to solve it. So here’s an opportunity for Sacramento to do something for this important segment of its state economy. The Assembly could budget a couple billion dollars to buy Oregon water and make it available to their parched orchards and fields.

The Oregon water could be loaded on long trains of tank cars, and the Union Pacific could take it south. It might not make up for California’s drought, but it would keep at least part of its farm economy going for another year.

Wait, is this a dream? Or a nightmare or what? Man oh man, what crazy ideas can be prompted by one little sign at an airport store! (hh)


7 responses to “All that winter rain — could we sell it?”