All about Albany’s Cathey Creek 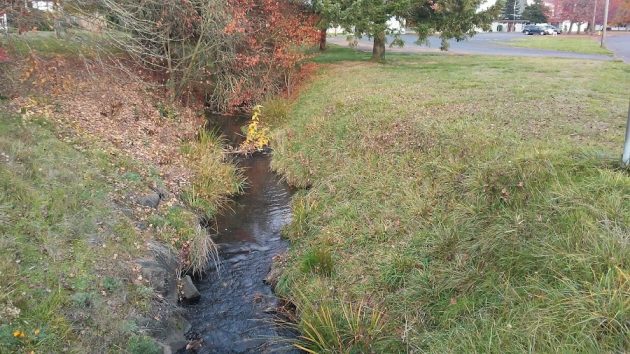 Cathey Creek near the First United Methodist Church on Nov. 14.

Among Albany’s waterways, there is Cathey Creek in the southwest part of town. It’s not big, but for a while this year it was blamed — unjustly it turned out — for complicating the construction of the new tennis courts at West Albany High.

In the September 30 report to the school board on bond projects, there was this intriguing nugget: “The city of Albany diverting the Kathy’s Ditch waters in an effort to help achieve required compaction in the tennis courts area was successful and compaction was obtained.”

Did anyone divert the little creek? And where?

No, says Matthew Ruettgers of the city. “It was initially thought that Cathey Ditch was a contributing factor to high ground water in the area of the new tennis courts, which was impacting the ability to achieve the appropriate compaction needed for the gravel base,” he wrote in an email. “Based on further investigation, the schools’ consulting engineer concluded the water encountered was coming from an unidentified source on site and not as a result of Cathey Ditch.”

Ditch? Any number of city signs call it Cathey Creek.

In any case, no, the creek was not diverted. According to Ruettgers, the city lowered the flow until it was determined the creek did not to contribute to the tennis court issue, and then the flow was returned to its normal level.

How did this waterway come about, anyway? Gordon Steffensmeier in Public Works Engineering dug up the info.

In 1939, C.C. Cathey and Merle S. Cathey signed over to the city of Albany a deed for a drainage ditch, and the deed was filed in 1942. This 40-foot-wide right-of-way starts on the west side of Highway 99E (Pacific Bouleard) just north of the new Albany police station, goes west 580 feet and then southwest for about 2,800 feet to Oak Creek.

To Steffensmeier, the first section near the highway looks entirely manmade while the rest appears to be a natural drainage way that has been channelized.

Where does the water come from? In the rainy season, Cathey Creek carries runoff from the highway and from city storm drains. When it’s not raining, the flow comes from the Santiam Canal.

There’s a diversion on the canal near 18th Avenue on the east side of the highway, near Taco Bell. From there, the canal water runs south in ditches and pipes for 2,400 feet, then crosses under Pacific to where Cathey Creek starts.

Steffensmeier found a 1948 aerial photo that shows no houses anywhere near the creek. Development started after that. The Fir Oaks Subdivision (Lawnridge Street and Park Terrace) was platted in 1948. The Hawthorne Park Addition around Crescent Drive and 26th Avenue followed in 1958. The Catheys owned both subdivisions.

I’ve long been interested in Albany’s waterways, which is why the bond report’s reference to a diversion of water made me take note. Now, at least, I know where Cathey Creek starts and where it ends.

As for the tennis courts at West, the latest bond report says the courts are now paved. But they won’t get their final “athletic coating” until next spring because for the coating to cure, the temperature must be above 70 degrees. (hh) 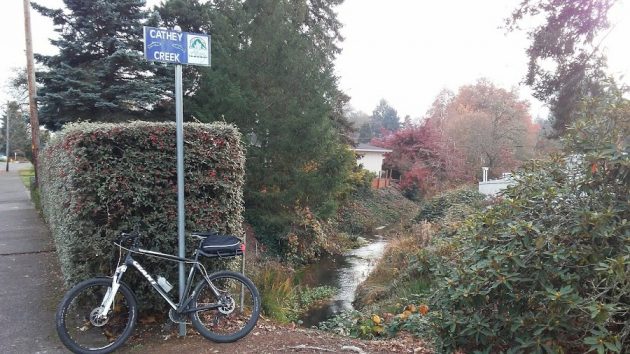 The creek after it crosses under Liberty Street. 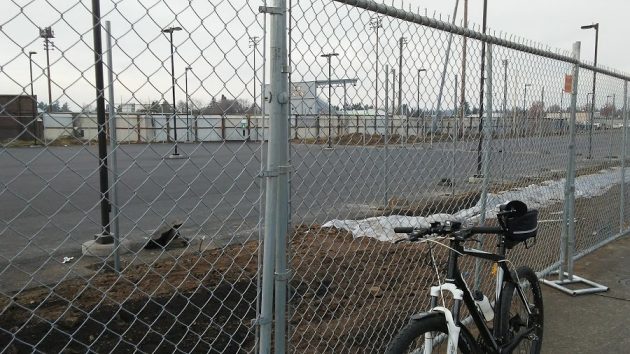 West’s new tennis courts, shown Nov. 14, are to be finished next spring.


6 responses to “All about Albany’s Cathey Creek”