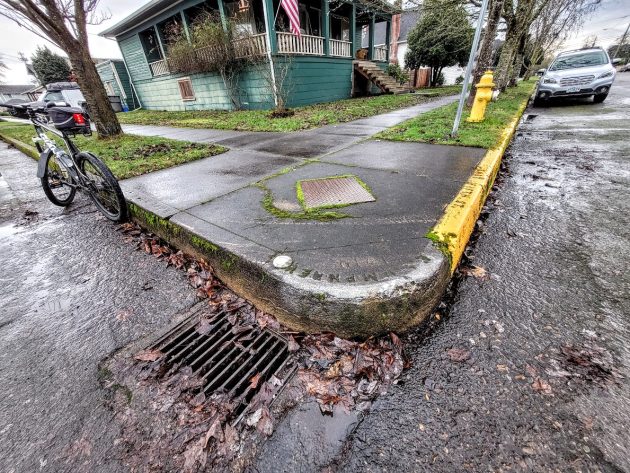 The corner of Fifth Avenue and Railroad Street on Thursday afternoon. The curb is about 10 inches high.

When a man named Humphrey poured the concrete for the curb at East Fifth and Railroad streets in Albany in 1910, he could not foresee that 80 years later Congress would pass the Americans with Disabilities Act.

Even without that foreknowledge, though, he might have wondered how people walking along there would negotiate the 10- to 12-inch drop from the sidewalk to the street.

The corner caught my eye on a bike ride Thursday, the day after the Albany City Council got a briefing on the city’s plan to make its services, especially its public rights of way, comply with the 1990 Disabilities Act.

The law requires that public services be accessible to all, including people with disabilities and users of wheelchairs.

For a couple of years now the city staff, especially the Public Works Department, has been working on a plan to see what needs to be done and then to start a transition period during which problems will be fixed.

Among other things, the work has pinpointed thousands of street corners, mostly in the older parts of town, where curb ramps should be installed. Of nearly 5,900 corners evaluated, only 153 were rated as “no deficiency.”

With the help of accessibility consultant Heather K. Buczek of the consulting firm MIG, the city also tallied ADA deficiencies of sidewalks, crosswalks and railroad crossings, pedestrian crossings at intersections, and on-street parking.

In general, the plan envisions that most of the deficiencies will be corrected over the next 15 years. Some will be fixed as part of larger street projects (as some already have been), and others may see action as the result of individual complaints.

A draft of the plan is available on the city website here.

When I read it, I saw nothing about the cost. If I heard her right, City Engineer Staci Belcastro told the council Wednesday the city would budget $150,000 per fiscal year for the accessibility part of the plan.

As for sidewalks, the plan mentions the option of getting adjacent property owners to help pay for any repairs to enable disabled people to pass.

It’s been more than 30 years since the ADA was passed. It took a while, but Albany is trying to catch up with what the law says cities must do. (hh) 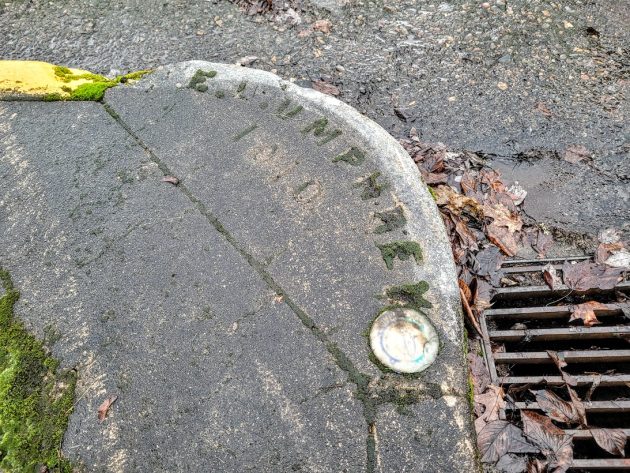 One hundred thirteen years ago, E. Humphrey wanted people to know who built that curb in old Albany’s east end. 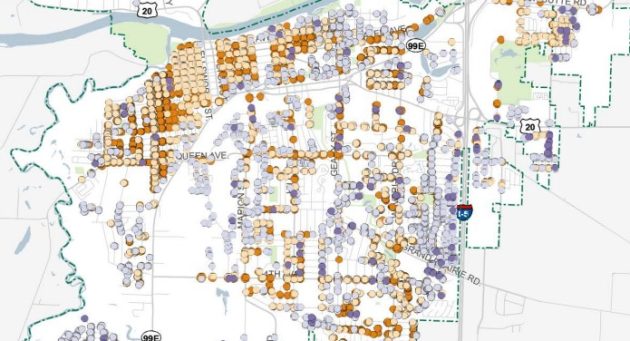 The draft plan includes this map of curb ramps that should be corrected to comply with the ADA. The colors designate the degree of urgency, orange being the highest.