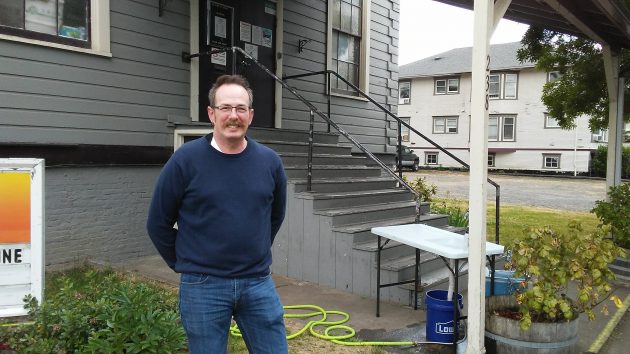 Jeff Blackford, executive director of CHANCE, stands outside the charity’s headquarters on July 1.

What happens with Albany’s oldest remaining church building once CHANCE, the charity that owns it, moves to new quarters in the King Griff Building a couple of blocks to the west?

Jeff Blackford has big plans, or rather hopes. He’s the executive director of CHANCE, which provides addiction resources and housing assistance in Linn, Benton and Lincoln counties. And he envisions the building at 238 Third Ave. S.E. to be restored to the way it once looked, up to and including reconstruction of the 30-foot steeple.

Albany’s inventory of historic buildings lists the structure as the Methodist Episcopal Church and says it was built in 1875. It’s old, but it’s also sturdy and in good shape, which I discovered when I dropped by on July 1 to have a chat with Blackford.

CHANCE has its offices there but plans to move as soon as the renovation of the former Pizza King restaurant at Third and Lyon is complete.

I didn’t get all the details, but the idea is to renovate the old church as a possible event center, available for meetings and weddings and that sort of thing. Funds would have to be raised to accomplish that.

This brings to mind similar plans for the former Cumberland Presbyterian Church at 401 Main St. S.E. A community group has been working on plans to take that building off the city’s hands, buy city-owned land near the skatepark at Hackleman Park, then move the building there and remodel and expand it as an event center, with money to be privately raised.

The city council on Wednesday will consider giving the Cumberland group an option to buy the site where they want the event center. But before any option or sale can be made official, state law requires a public hearing to be held.

So in theory here’s a scenario: We have two historic church buildings in a potential race to see which can raise enough money to become an event center first. The CHANCE building might have a head start since it doesn’t have to be moved, and it’s already owned by the group that hopes to fix it up.

And putting that steeple back up — now that would be a crowning touch. (hh) 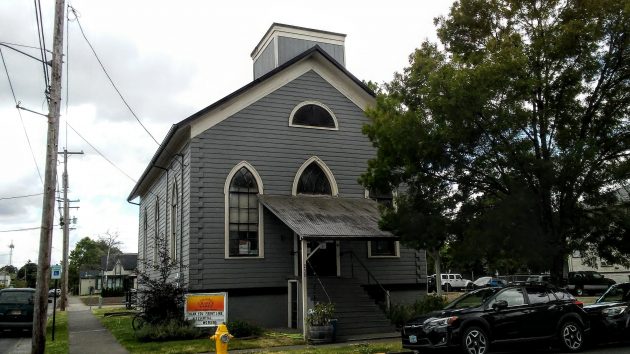 The former church at 238 Third S.E. might one day get its steeple back.