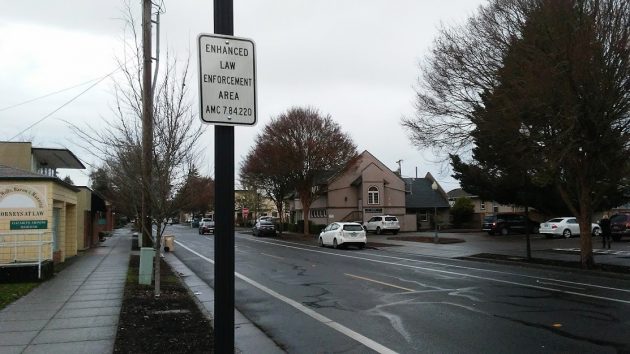 It’s been nine months since the Albany City Council voted to establish an exclusion zone in the central part of town from which the city judge can banish repeat offenders for up to a year. So, has anyone been barred?

As it turns out, yes. On Sept. 19, the municipal court ordered a 64-year-old man to stay out of the “enhanced law enforcement area” for three months. He apparently did so. He was charged with criminal trespass on Dec. 20, one day after his banishment was over, but it’s not clear if that citation was given inside or outside of the exclusion zone.

After a good deal of impassioned public testimony for and against, the city council adopted the ELEA on March 28, hoping it would cut down on criminal activity within a large part of central Albany. The designated area stretches from Elm Street in the west to Pine Street in the east, and from Pacific Boulevard north to the Willamette River. It includes Bryant Park, Albany Station, and the Portland & Western rail yard.

In September, in response to a federal judge’s ruling in an Idaho case, the council dropped camping on public property as one of the offenses mentioned in the law.

The convictions that triggered the three-month expulsion of the 64-year-old included two for criminal trespass and two related to consuming liquor in public, such as in a park. The man was described to me as a regular in city court.

When the council adopted the ordinance in March, Dick Olsen was the only no vote. He didn’t think it would solve the problem. Bessie Johnson, a previous no vote, joined the four other members to pass the ordinance. But she wanted a commitment that there would be a report later on how the law was working, because if it wasn’t it could be changed. “Discussion followed,” the minutes say, “and it was decided that staff will make a report at the end of the year.”

The year’s end has come and gone. As far as I know, the council is still waiting for the report. (hh)