Albany’s next police chief will be… 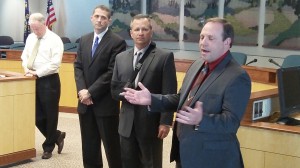 Not the guy I thought it would be. When I first wrote about the May 1 appearance at a public forum of the three finalists — Corvallis Police Capt. Dan Hendrickson of Albany, Assistant Chief Mario Lattanzio of Mesa, Ariz., and Deputy Chief Jim Peterson of Pocatello, Idaho —  I thought that Hendrickson was clearly the top choice. But on Friday City Manager Wes Hare announced he had offered the job to Lattanzio.

The city manager was quoted in the local paper that the man from Mesa finished ahead of the others by a large margin, in his view. The Mesa department is huge, as you would expect from a metropolitan department, more than 10 times the size of Albany’s. I would have thought that metropolitan policing differed substantially from the way the job ought to be approached in a small town where major crimes are rare. But maybe not. And even if it is different, maybe Albany’s new police chief can adjust.

In this selection, it was impossible for the city manager to make a mistake. All three finalists have an exemplary background in police work, and all came across as good men whom the public can trust. Based on what they said in the public forum Wednesday and how they said it, I thought Hendrickson made the best impression. Impressions don’t necessarily count, and mine certainly did not in this case. (hh)

This is a rewrite of a piece posted on this site on May 2.