The council was shown this photo of carts at the Albany police station after a recent cleanup sweep.

When it takes effect in 30 days, Albany will have a new shopping cart law. The city council unanimously passed it Wednesday night without debate, but it’s not clear what difference it will make in the number of carts being dumped and left.

The main difference from the law in effect since 2008 is this: If the city takes possession of an abandoned cart whose owner can’t be identified, it can dispose of it immediately without having to wait 30 days. This should make storage of abandoned and recovered carts less of a headache.

Another difference is that while carts must bear some identification of the business as before, carts no longer need to show a toll-free number to report abandoned carts. That requirement has been widely ignored.

The council asked no questions about enforcement. There is no known case of the existing law being enforced.

The council heard from no supermarkets or other shopping cart providers, an indication that like the existing city code, the new language is no big thing to them.

Under the new code, cart owners are supposed to post signs that making off with carts is a crime. They must establish a “shopping cart retrieval group,” whatever that is. They must also retrieve abandoned carts, and do so within 72 hours of being notified.

If they don’t retrieve a cart, the city may fine them $50, the same as under the old law. If they do retrieve it from the city, the city may “release” the cart for $50. (This sounds like whether they come and get it or not, it may cost them $50 either way.)

Ominously, the council’s enactment says that for violations of the municipal code, other penalties are available. These include up to $1,000  for a violation and up to $2,500 and a year in jail for a misdemeanor.

None of that raised any eyebrows on the council before the unanimous vote. (hh) 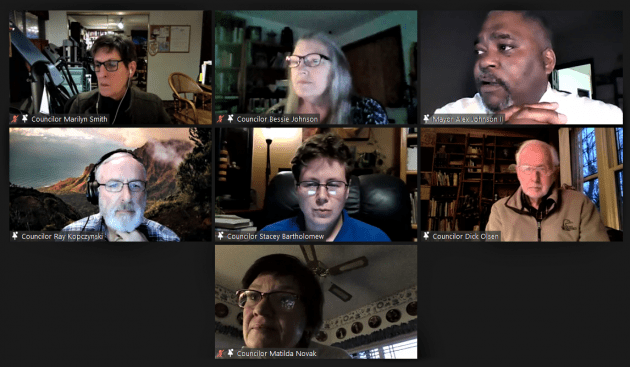 The Albany council during its Wednesday night meeting via Zoom.