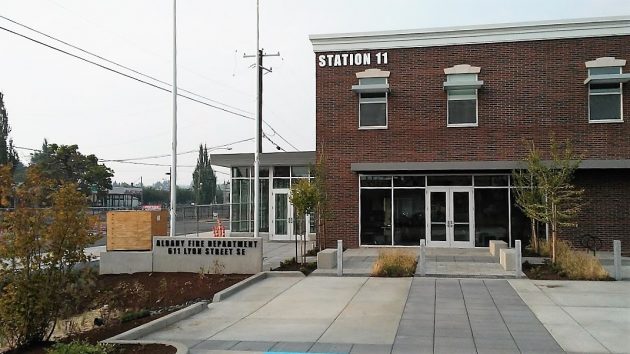 The name is up on the side of Station 11, expected to open early next month.

In big letters high on the wall, its name is hard to miss when you drive past Albany’s new main fire station, now nearing completion. But why do they call it Station 11? Why not Station One, for example, which would seem to make more sense?

The designation is the result of the system that’s in place for naming fire stations countywide, and Albany Fire Chief John Bradner explained it to me today.

The system’s origins are veiled by the mists of time. But some time long ago, someone decided that for the sake of clarity, each fire department in Linn County would have different number. No doubt this is helpful in dispatching, and maybe for other reasons too.

This meant that the first and main station in Albany became 11. When a second station was built on 34th Avenue in South Albany, it became Station 12. Albany added fire stations east of I-5 and in North Albany in the 1990s, and they became Stations 13 and 14. And if Millersburg builds a fire hall staffed by the Albany department, as seems to be the plan, it will become Station 15.

Bradner says the new main station is just about finished. Furniture will be moved in next week, and fire crews housed in temporary quarters off Hill Street during the construction will move into the building with their equipment in the first week of October.

The construction project started in August last year with the demolition of the old Station 11. At about the same time construction began on Albany’s new police headquarters on Southwest Pacific Boulevard. That station is expected to be completed in a matter of weeks. Gerding Builders of Corvallis built both structures under a combined contract of $19.5 million.

Albany voters approved $18 million in bonds to cover the lion’s share of the cost. No doubt there will be tours of the two buildings before too long, and voters then can see the inside of what they bought. (hh) 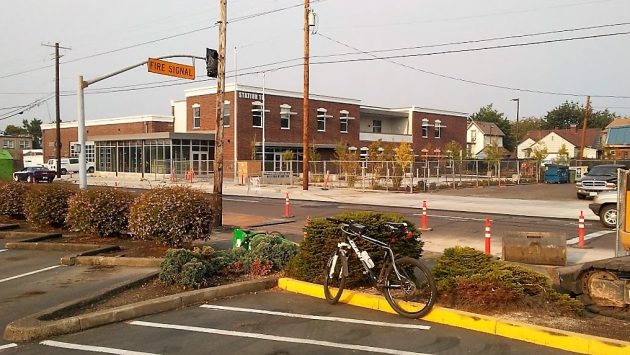 The new fire station the way it looked last week from across Lyon Street.