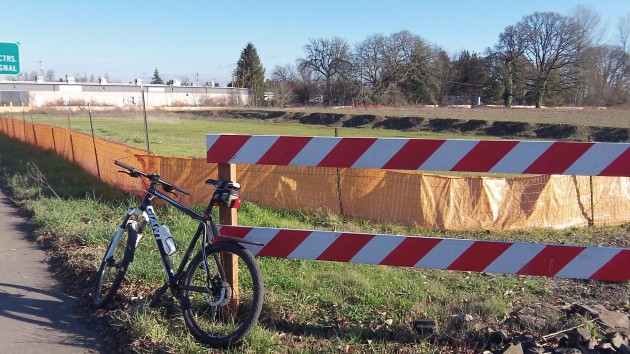 The Lowe’s property off Ninth Avenue on Thursday afternoon: Still quiet, but not for long.

Even though there are no signs of this on the ground, or because of this, Albany Councilman Floyd Collins wants the public to know that plans for the Lowe’s home improvement store at Ninth and Oak are back on track.

Now that the city and Lowe’s have signed off on a modification of their original development agreement — a process that was completed Monday —  Collins on Wednesday asked the city staff to issue a press release, and on Thursday City Manager Wes Hare duly put one out.

The store was supposed to have been open in 2014 or the company would owe the city damages. During the year, Lowe’s asked to renegotiate that deal, and this was done. Under the modified agreement, the store is to be built this year. If it’s not open by New Year’s Eve, the company faces damages that get bigger the longer there is no store.

The city’s press statement didn’t go into details, but here they are:

— The store must measure at least 125,000 square feet including a garden center, slightly smaller than originally planned, and comply with all land use requirements.

— Once the store opens on time, Lowe’s pays the city a fee equal to one year’s property taxes on the improvements (other than the taxes on land vaue). That’s to compensate for the year’s delay.

— If the store is not open by the end of 2017,  the unpaid balance of the $2 million is payable immediately. In addition, Lowe’s would owe the city a fee equal to the property taxes on the assumed value of the store for the tax year 2018. If the parties can’t agree on the assumed tax amount, an arbitrator would decide.

— And as a “final inducement” to allow modification of the original agreement, Lowe’s agreed to pay its street assessment under a local improvement district as soon as the assessment ordinance is passed, and it won’t apply to pay in installments. The amount of the assessment is not yet definite, but city officials say it’s about $800,000.

City Attorney Jim Delapoer has explained that the whole point of the agreement is not to collect the damages but to get the store built. It’s worth remembering that the city of Albany spent close to $5 million on road and utility improvements prompted by the Lowe’s project. The city expects Lowe’s to submit its building plans for a permit in February. (hh)