East Albany’s Main Street at Third and Salem avenues has been torn up all summer. But the end is in sight. Well, it’s about six weeks away.

In the video I say that this project was supposed to be finished by the time school resumes, but I may have been mistaken. Albany Public Works Director Mark Shepard today provided this update on the project, for which the city let a $1.8 million construction contract in March:

“The project is going well and is currently on schedule. The road is scheduled to be open by September 19. After September 19, there will still be work occurring outside the curb lines but there should not be any more road or lane closures.” 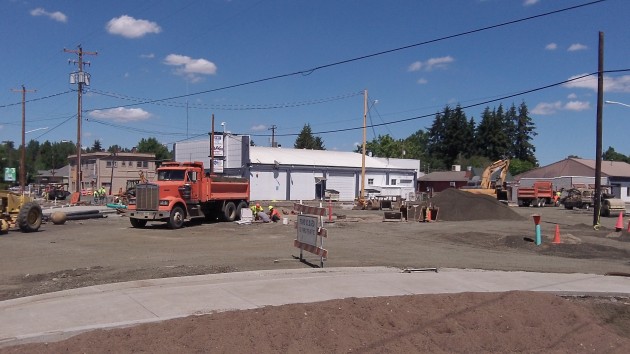 Businesses in the construction zone including Whitaker’s flooring, paint and wallpaper store have remained open. Getting to them has been a bit of a challenge, but signs point the way.

As for the city-owned old church at the corner of Santiam and Main, plans to dispose of it have been postponed until after the road construction is finished. The city then plans to issue a request for proposals from potential buyers, who will be expected to spell out how they would restore and use the building.

The roundabout is intended to ease traffic congestion and make left turns easier in this busy corridor. When it’s all done, it will connect Main Street to Salem Avenue on the east and Third Avenue on the west, and there will be a new junction of Main and Santiam Road. There will also be new sidewalks, parking spaces, and features to collect rain water. (hh)