Albany’s credibility problem and how to repair it – Hasso Hering

Albany’s credibility problem and how to repair it 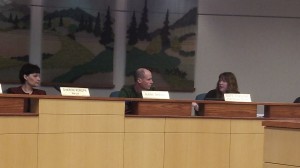 Mayor Sharon Konopa, Mark Spence and Urban Renewal Manager Kate Porsche at a meeting of the CARA advisory board April 17.

The Albany city government has a problem. It’s a problem with credibility and it’s connected with public safety and urban renewal.

In March 2012, city voters approved a public-safety tax levy outside the city’s normal taxing authority. Voters were assured the money would go to the police and fire departments. Most of it does. But about $100,000 of it goes instead to the Central Albany Revitalization Area.

Urban renewal is financed with tax revenue siphoned off from all the other tax levies for the city, county, schools and other entities. This was explained dozens of times over the years, and it should have been obvious in the run-up to the election in 2012, but it wasn’t pointed out this would also reduce the amount going to public safety. I didn’t take note of it until this spring, when the legislature started considering a bill to exempt local option levies — like the one for Albany police and fire — from having some of their proceeds sidetracked to urban renewal instead.

Now the city council, acting as the Albany Renewal Agency, must face the issue. Barring some legislative fix, which is not certain and can’t be made retroactive in any case, the renewal agency can’t just refrain from levying that part of its tax that takes money from police and fire. So for 2013-14, the ARA should refrain from levying any money it does not need to meet obligations already incurred. That would help all the other taxing units, and in a small way the police and fire departments too. (hh)

Ray Kopczynski responded on April 22: Even Gordon Shadle specifically stated the siphoning effect back in Oct/Nov in his blog comments.  It has never been hidden from anyone – at any time.  Any under levying would benefit the city of Albany much more than any other taxing district – by law.  Since the amount cannot, by law, be dedicated to any specific taxing district, nor specifically to any entity within a given taxing district, it would be impossible to say a single dime of any under levy would go directly to police &/or fire.  To believe so is pure wishful thinking in my opinion.

On April 23, Ray Kopczynski amended his response: I was wrong in my original statement. Further checking with city staff, CARA does receive just under 5% from the Police and Fire Levy – as it has in previous levies.  As a consequence, 4.87% of any under levy would go back to them.”

Gordon Shadle responded on April 22: If ARA/CARA is serious about fixing their credibility problem, they should start by following through on their promises.  Under the leadership of former Councilor Jeff Christman in the spring of 2012 ARA/CARA took “a breather” from spending. They promised to improve their decision making process and deliver a project selection method that made sense. Since then, nada. No improvement, no credible project selection process… nothing. The only constant is the insatiable desire to take money from the other taxing districts and spend that money on pet city projects. Credibility, once lost, is almost impossible to get back. It would be nice if ARA/CARA at least made the attempt.