Albany’s CARA: In search of direction 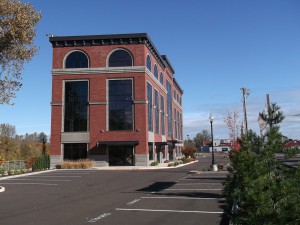 The Wheelhouse builiding on the Willamette River was privately funded and also received some assistance from CARA.

Albany’s downtown urban renewal district is working once again to define what it wants to do from now on, and how.

Earlier this year the city council, acting as the governing board of the Central Albany Revitalization Agency or CARA, put several pending projects on hold. In October, the CARA advisory board agreed that it would draw down or borrow the roughly $3 million remaining of a $5 million line of credit with Bank of America, with the understanding that the money would be available for public infrastructure projects such as street and utility improvements to encourage development.

On Wednesday, though, the city staff recommended a change in financing, and the council approved it. Now the renewal agency, instead of borrowing more, will use cash on hand to pay off, in order to avoid additional interest charges and fees, the $1.97 million already borrowed and spent. Then the renewal agency — essentially the city government but legally a separate entity — will explore less costly financing for any public infrastructure projects that it decides to pursue in the meantime.

What projects? That’s the big question now. The urban renewal plan, adopted in 2001, lists 51 projects or possible activities, mostly downtown. About $13.8 million has been spent on some of them so far, according to a table urban renewal manager Kate Porsche drew up. These include street work on First and Broadalbin, as well as numerous aid packages to private remodeling projects and other building ventures such as the Albany Carousel.

The advisory board spent some time discussing how to pick its next projects, but so far there’s no agreement and no clear direction. The board will meet again on Dec. 19. (hh)