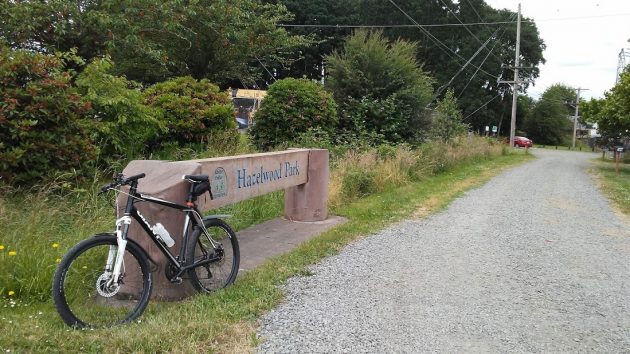 Bracketed by two electrical power substations, the entrance to this Albany park would be easy to miss if not for the big sign on Queen Avenue S.W.

Hazelwood Park looks like a forgotten part of the Albany park system, which totals about 600 acres at 32 sites. The system has 20 neighborhood parks, and Hazelwood, at 1999 Queen Ave. S.W., is one of those.

At 3 acres, it is not the smallest. But it’s kind of out of the way. One of my bike routes takes me past the entrance, and this week I turned into the gravel driveway instead of riding past as usual.

The driveway leads into the park between a Pacific Power substation on the right and a sprawling installation of the Bonneville Power Administration on the left.

Inside the park, there’s not much there, though a listing on the city’s website says the place has picnic tables. Years ago, when we still had day jobs, my wife and I once sat at one of them for an impromptu picnic after work. Until Wednesday, I hadn’t been there since.

In 2006, a master plan for Albany parks recommended that the city “explore divestment of Hazelwood Park if another, more centrally located site can be acquired to serve Neighborhood No. 16.”

“We have not found a buyer, so the idea died on the vine,” Director of Parks and Recreation Ed Hodney told me when I asked. “I’ll reassess our options with the new park system master plan update over the next several months.”

Visitors to Hazelwood Park, rare as they may be, can’t help but notice the grove of towering oaks that dominates the site. That kind of “oak island,” home to all kinds of wildlife, is getting to be rare in the Willamette Valley.

“The oak grove,” Hodney says, “should be preserved, no matter the disposition of the park.” (hh) 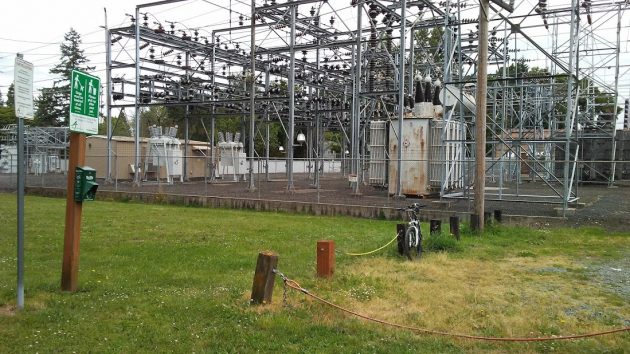 Pacific Power’s Hazelwood substation on one side of the park. 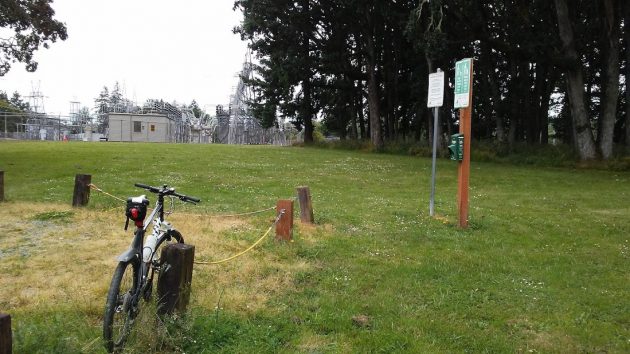 And the BPA installation on the other.