Albany’s ADU flap: It’s not over yet 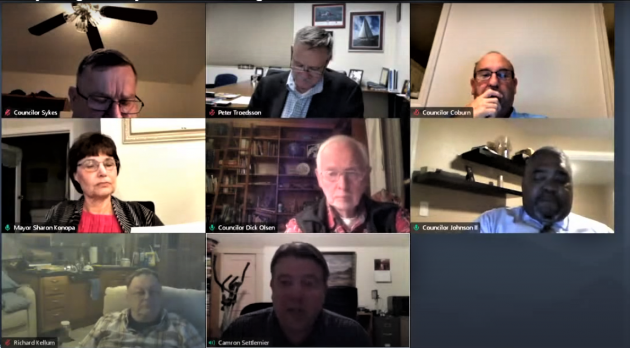 The Oct. 14 council meeting on the screen: Camron Settlemier, bottom center, testifies against the ADU ordinance.

Albany’s struggles over the size of permitted “accessory dwelling units” or ADUs appeared to have ended last month, but not so fast. Now the Oregon Land Use Board of Appeals may get involved.

The city council acted on Oct. 14 and 28 to pass an amendment intended to make the city’s development code conform to changes in state law. The amendment dropped previous city requirements on ownership and off-street parking when an ADUs is added. This was required by the state, but the amendment also increased the maximum allowed size of ADUs from 750 to 900 square feet, or 50 percent of the main house, whichever is less.

Camron Settlemier, whose house on Seventh Avenue lies in the Monteith Historic District, often advocates for preserving the city’s historic neighborhoods. On Oct. 14 he testified before the council against the ADU amendment.

He feared that the 900-foot maximum, not required by state law, would encourage “out of state landlords” and “outside investors.” This would increase pressure on redevelopment, eventually doubling the density of established neighborhoods.

On Nov. 3, Settlemier filed a notice of intent to appeal the council’s ADU action to LUBA. If he follows through, the city will be forced to defend its action before that land-use court, which could reject the appeal or order the city to change its action.

ADUs, however, may soon be of little consequence. On Monday (Nov. 16)  the city council and planning commission will get a briefing on more fundamental changes in the development code required by the legislature. By the middle of 2022, Albany and similar-sized cities must allow so-called “middle housing” in their residential zones including historic districts.

As for ADUs in Albany, the change in the allowable size will take effect Jan. 1, 2021, unless LUBA blocks it.

How big is the interest in ADUs? The city received six applications for such units since the start of 2020. None was in the historical districts. Only one, in North Albany, was for close to 900 square feet, and that’s been withdrawn until the code amendment takes effect.

Building Official Johnathan Balkema told me on Thursday the others ranged in size from about 400 or 500 to 750 square feet.  One of them got a building permit, another was about to get one, and the others were still being reviewed. (You can look them up in “BuildingEye” on the city planning division’s website.)

So, if you thought last month you’d heard the last of ADUs, I thought so too. (hh)


3 responses to “Albany’s ADU flap: It’s not over yet”