Albany’s a no-show in airport display 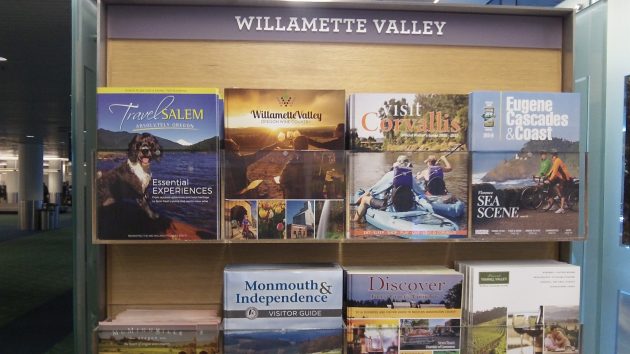 See any Albany brochures is this array? I couldn’t find one.

With a couple of hours to kill in the international arrivals hall at the Portland airport Saturday, I spent a few minutes checking out the brochures at the Oregon Welcome Center there. I noticed that among the glossy invitations from Salem, Corvallis,  Eugene and even Monmouth, Albany was conspicuous by not being there.

The city of Albany expects to take in more than $1 million this fiscal year from the “transient lodging tax” collected on the city’s behalf from guests paying for rooms at hotels. You’d think that in all that loot, there’d be a little set aside for the kind of slick brochure that other Willamette Valley destinations have produced and put on display where foreign visitors first set foot in our state.

How to spend the room tax money has been the subject of city council discussions. The council appointed a special committee, headed by Scott Pierson, a member of the city budget committee, to deal with the question. The panel has been meeting every month since March and has another session scheduled Tuesday (3 p.m. Sept. 5, Santiam Room, City Hall).

This budget year, the room tax revenue  money is distributed among the Albany Visitors Association, the Albany-Millersburg Economic Development Corp., the Downtown Association, and numerous other “activities.” Those are not enumerated in the budget but they include, among others, the Art and Air Festival, capital improvements at the city airport, and allocations for law enforcement work in connection with events.

One of the items of contention has been whether more of the money should be dedicated strictly to attracting visitors that would stay in local hotels for more than one night. If the idea is to maximize room tax revenue so that all those can keep getting funded, than promoting more stays Albany tax-collecting motels seems like an item that doesn’t need much debate.

Whether splashy brochures on display at the Portland airport would serve that purpose is a question I can’t answer. But those other valley towns sure seem to think that they do. (hh)


13 responses to “Albany’s a no-show in airport display”