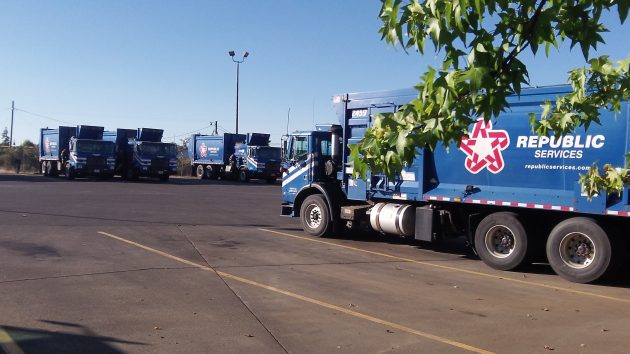 Albany customers of Republic Services won’t get weekly yard debris pick-up, and they won’t have to pay $3 more a month for their disposal service as Republic had proposed. That’s the result of a city council decision Wednesday night.

The council voted 5-1 against the company’s plan to pick up yard debris carts every week instead of every other week as now. The result was a surprise to me because at a work session on Sept. 26, only Councilman Rich Kellum pushed back while the others, while saying little, seemed to nod their assent.

The company had produced an email survey showing a majority of respondents favoring weekly yard debris service, which also would allow customers to put their food waste in with the lawn clippings for recycling as compost. But Kellum pointed out that the number in favor was only about 3.5 percent of all of Republic’s Albany customers. Again on Wednesday, he said he could not see requiring everybody to pay for something they apparently didn’t need just because a tiny minority had asked for it.

Mayor Sharon Konopa argued for the proposal, suggesting among other things that weekly collections of yard debris might make the town look neater. Households would trim their bushes and cut their lawns more often because they would have some place to put the clippings.

The council heard from a couple of residents in favor of the change. One sounded dismayed that Lebanon already has the weekly service while Albany doesn’t. Corvallis also has it.

There also was talk about methane and the relative rate of food waste composition in a landfill versus a composting operation, plus related topics. In the end, Councilman Ray Kopczynski’s was the only vote in favor of the increase in service and price. Councilors Kellum, Floyd Collins, Dick Olsen, Bill Coburn and Bessie Johnson voted against it.

As I was listening to all that, I thought it’s not as though the status quo leaves Albany households wanting to compost their food waste without options. For one thing, if they don’t want to bother with it themselves, they can collect their scraps over a couple of weeks and then dump it in the yard debris cart the day it’s picked up. And if it doesn’t fit, they may be wasting too much food.

And then there’s this: Now, Republic trucks make five runs to each house every two weeks (garbage twice, recycling twice, and yard stuff once). The council action means Republic doesn’t have to make a sixth run. Think of the savings in diesel fuel and exhaust, not to mention a little less stress on our crumbling roads. (hh)