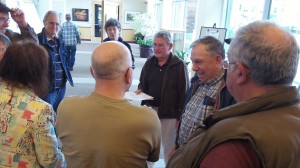 By declaring Albany’s debt-limit charter amendment to have passed, the city council could make peace with the more than 5,000 voters who approved it last month. But apparently it won’t.

At a work session Monday, the council majority seemed to agree to go ahead and accept the vote totals on Wednesday, the deadline, but declare that the initiative didn’t pass because it got merely a plurality but not an absolute majority of the voters. This after Tom Cordier, the initiative’s sponsor, publicly committed himself to helping a committee draft a replacement measure to be put on the ballot and then campaigning for it to be passed in November.

Cordier pointed out the obvious: If the council rejects a measure approved by the voters — based on the theory that it required an absolute majority because of the use of the words “majority of electors” — the likely public outcry will make passing a replacement much harder. He came armed with a Salem lawyer’s opinion that a court might well find, based on intent and legislative history, that the phrase doesn’t require an absolute majority as the city attorney believes. (City Attorney Jim Delapoer says there’s no legislative history here to help divine the intent. Oh yes there is, Cordier replies. It lies in a letter he filed in response to an election-law complaint against him on that very point — what the measure meant — a complain which was dismissed.)

On Monday, only Councilor Rich Kellum argued for declaring the measure passed despite any legal misgivings. After all, I thought as he was speaking, since the city government intends to comply with the measure whether it’s in the charter or not, what does the council have to lose by putting it in?

“…since the city government intends to comply with the measure whether it’s in the charter or not, what does the council have to lose by putting it in?” Even Tom Cordier agrees the current wording needs to be changed.  To intentionally put into the city charter a flawed measure – regardless of voters “intent” is fundamentally wrong.  I only speak for myself, but I cannot vote for a measure ALL parties agree needs to be reworked. The proposed ordinance allows for that process to unfold in a very civil and short time frame to get it onto the November ballot to avoid litigation.

My reply to Ray Kopczynski: Remember state Ballot Measure 47? Everybody agreed after it passed that it was unworkable, but nobody even thought of refusing to enact it. Instead, the state put it on the books and the legislature worked out a version that could at least be carried out, and voters adopted it as Measure 50 at the first possible election.

Statements are being circulated saying I agree Measure 22-117 is flawed (and) needs some clarification. Yes I could have used better words like “majority of electors voting” but I don’t believe the measure is fatally flawed. Deciding the measure failed because of the word “electors” is a terrible outcome. I agree with Councilman Kellum. Here we are: Two expert attorneys — one inside the city system and one outside — have different written opinions on how a judge would rule and no one wants to spend the money to get a judge to rule. It appears the Council is placing more value in the City Attorney’s opinion about the word “elector” than the legal opinion of Mr. Nathan Rietmann presented to the Council Monday,  4/8. Perhaps they have not taken the time to read Mr. Rietmann’s detailed legal opinion.

The fact that the mayor and two sitting councilmen invested money and formed a PAC to defeat the measure should not be lost in this struggle. Other sitting council members also made contribution to that effort. In a perfect world conflicts of interests like that would require those parties to remove themselves from the decision making process. It appears they have not accepted the vote and moved on.

Although reasonable people without any influence from any elected official can craft a needed new measure, I do encourage the Council to declare the measure passed on Wednesday. The minor risks associated with that decision are worth not offending the voted will of the people.